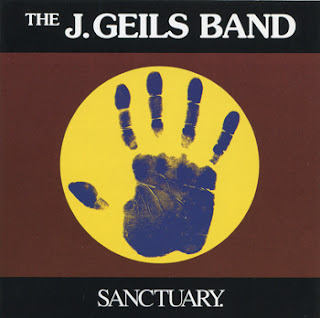 When the J. Geils Band burst onto the scene in the late ‘60s, they took many people by surprise with their original brand of rock ‘n’ roll, served up with a strong double-shot of rhythm and blues. Their first few albums, with their live shows, proved them to be a powerful band at the least, and a great band on many occasions.

But then it happened…maybe it was boredom that set in, maybe it was just too much of a good thing too soon. Whatever the reasons, suddenly, the J. Geils Band became, well… predictable. And a predictable band often times becomes a dull band. This was the fate that befell J. Geils and crew. The result was several uninspired albums, and many disappointing concerts. For a lifelong fan of the band, it became embarrassing.

Sanctuary, however, is the album that will clear the good name of J. Geils for quite some time. What could have become a slow death has instead become a breath of life for the Beantown boys. The spirit and dynamic felt after sitting through albums like Geils’ Morning After and Full House – Live is here again. The album starts with “I Could Hurt You,” a bluesy, dirty rocker in which we hear Peter Wolf’s gruff, gritty vocals at their best.

It doesn’t stop there, either. Just like a sock hop in the old days, they mix the dancing numbers with a few slow ones like “Theresa” and “I Don’t Hang Around Much Anymore.” Then, after two or three minutes of slow bumping and lotsa grinding, they burst into something like “Wild Man” to relieve you of the sweet pain.

Geils’ guitar work, along with Wolf’s vocals and the mouth harp of Magic Dick are sharp, powerful, and final. Using their influences wisely, at times they sound like everybody from Southside Johnny to Mick Jagger to the Nighthawks. But in the end, they’re just the J. Geils Band. And thankfully, Sanctuary marks their triumphant return to the rock ‘n’ roll/blues scene they helped create.