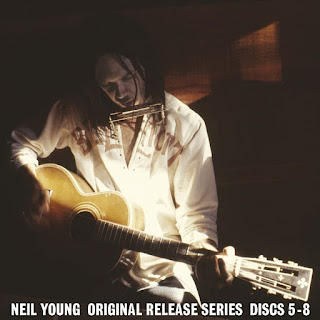 Neil Young is inarguably one of the most innovative and influential artists in rock ‘n’ roll history. The singer/songwriter is also mercurial and controlling and has been known to shelve otherwise valid music for years or decades if initially unpleased by the recorded results. Still, Young’s Official Release Series is gradually correcting the artist’s oversight by making classic music available once more for the hardcore faithful and new listener alike.

The limited edition Official Release Series, Discs 5-8 is a four-CD box set which includes Young’s albums Time Fades Away (1973), On The Beach (1974), Tonight’s The Night (1975), and Zuma (1975). All the albums have been re-mastered in high resolution from the original analog studio recordings at Bernie Grundman Mastering and feature historically-accurate artwork reproduced by Young’s longtime art director Gary Burden.

Interestingly, Young is finally releasing Time Fades Away on CD for the very first time since it originally went out of print almost 45 years ago (Young wouldn’t release the dark-hued On The Beach album on CD until 2003). Time Fades Away represents a fascinating chapter in Young’s career, the album the first of three that would become known as the “Ditch Trilogy” as the artist veered away from the commercial sound of Harvest in trying to cope with fame and the death of friend and Crazy Horse band member Danny Whitten. More than once Young would refer to it as “the worse record I ever made,” going so far as to cancel a 1995 release of the album on CD. 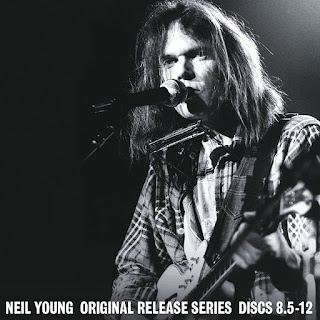 Also on May 12th, Young will release Official Release Series, Discs 8.5-12, a five-CD set that encompasses 1976’s Long May You Run, recorded by the Stills-Young Band, American Stars ‘N Bars (1977), Comes A Time (1978), Rust Never Sleeps (1979), and Live Rust (1979). These albums are as equally contentious as those represented in the previous box set. After reuniting with Crosby, Stills and Nash after a four-year hiatus for a monster stadium concert tour, Young recorded Long May You Run with bandmate Stills. The album was a commercial success, charting Top 30 and earning the pair a Gold™ Record, but Young left partway through a tour in support of the album when tensions flared up between him and Stills.

Young had reformed Crazy Horse with guitarist Frank Sampedro for Zuma, and he brought them back for American Stars ‘N Bars, a Top 30 album pieced together from various sessions and including guests like Emmylou Harris and Nicolette Larson. Young returned to his folk roots for Comes A Time, a Top 10 charting album that was as close as the artist would come to the sound of Harvest in better than five years. Young would change directions once again, again veering towards the ditch with the release of the live/studio amalgam Rust Never Sleeps in 1979, and following it up later that year with Live Rust, a mix of old and new material performed during Young’s 1978 “Rust Never Sleeps” tour. Both albums would chart Top 20 and earn Young Platinum™ sales status.

Together, these two box sets gather together nine albums from what is arguably Young’s most successful and creative period, all of them heightened with freshly re-mastered high definition sound and placed in chronological order.