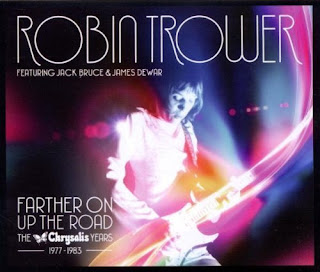 Guitarist Robin Trower came to prominence during the 1960s as a member of British rockers Procol Harum. While Trower’s textured six-string contributions to Procol Harum’s first four albums were often overshadowed by the band’s trademark heavy keyboard sound, his talents were an essential part of the band’s early success. Trower broke from Procol Harum in 1971 to launch a solo career that would result in phenomenal commercial success during the 1970s, cooling off considerably during the ‘80s, only to be reinvigorated somewhat during the 1990s by the guitarist’s return to his blues roots, an undeniable influence that had always been part of Trower’s sound, even during his arena-filling heyday.

Although Trower continues to burn up the highways in both the U.K. and the United States with frequent touring, and the guitarist releases new records on a fairly regular basis, it’s not too soon, perhaps, to take another look at the roots of a legendary career that is now in its sixth decade. In 2010, Chrysalis Records (a Capitol Records subsidiary) released the three-CD Robin Trower compilation A Tale Untold, which included the guitarist’s first four solo albums as well as his 1975 concert disc Live!, along with a handful of rare bonus tracks. Although this first box set neatly wrapped up Trower’s breakthrough years with Chrysalis, circa 1973 through ‘76, it only told part of the story.

Robin Trower’s Farther On Up the Road


To fill in the blanks, Chrysalis/Capitol has released Farther On Up the Road: The Chrysalis Years 1977-1983, another three-disc set that features the six albums that made up the rest of Trower’s tenure with Chrysalis, as well as a pair of obscure bonus tracks. Trower’s transition from pop star to bluesman is quite apparent across these three CDs, beginning with 1977’s In City Dreams. Moving away from the psychedelic-blues sound of his earlier solo discs, Trower tried to update his sound for end-of-the-decade audiences with some success; the album would rise to #25 on the Billboard magazine albums chart.

Trower made changes to his band line-up with In City Dreams, relegating his longtime bassist/vocalist James Dewar to the microphone and bringing in new bass player Rustee Allen to keep the rhythm with veteran drummer Bill Lordan. Allen would bring a funkier edge to the material, his fluid basslines throbbing behind Trower’s soaring fretwork. Nowhere is this more obvious than on the album’s lead-off track, “Somebody Calling,” Allen’s strutting rhythms straining in counterpoint to Trower’s screaming psyche-blues guitarplay. The album’s highlight is “Farther On Up the Road,” from which this set takes its name, Trower and crew delivering a raucous take on the blues-rock standard with plenty of raging guitar and crashing drumbeats. “Little Girl” comes the closest to Trower’s early 1970s work, while the album’s title track virtually channels Trower’s “Bridge of Sighs” both sonically and emotionally.


Victims of the Fury


Trower kept the band line-up intact for 1978’s Caravan To Midnight, further pursuing the previous album’s funk-infused sound with tracks like the flaccid chamber-pop of “Birthday Boy” or the misguided “My Love (Burning Love),” which sounds too much like a bad Foreigner single. The album is not a complete loss, however, as the instrumental title track crosses over to truly ethereal turf with melodic guitarplay that reminds of Carlos Santana, sans the obvious Latin influences. Allen’s bass playing on the song is jazzy rather than funky, and the backbeat is kept to a minimum; ditto for “Fool,” a bluesy, smoldering, mid-tempo track with riff-happy guitars that evinces a pub-rock vibe similar to Frankie Miller’s best work.

Perhaps unsatisfied with the reception and direction of his previous two albums, Trower stripped the band back to the power trio format he made his reputation on, putting Dewar back on bass and vocals for 1979’s Victims of the Fury. Working with new producer Geoff Emerick, who had engineered the guitarist’s first two solo albums, and bringing in songwriter Keith Reid from Procol Harum to help with lyrics, Trower begins his evolution back to the blues. Starting with “Jack and Jill,” a tough-as-nails tale with scorched-earth fretwork and squalls of bass and drums, Victims of the Fury pursues a blue-hued, harder-rocking sound. Trower cuts loose and lets his freak flag fly with “Roads To Freedom,” the guitarist’s Jimi Hendrix-styled Stratocaster sound accompanying a moody, psychedelic-blues soundtrack. “Into The Flame” sounds like early 1960s-era Eric Clapton mixed with late 1960s-era Cream…with Eric Clapton, while “Mad House” pairs a locomotive rhythm with an unrelenting barrage of riffs to great effect. 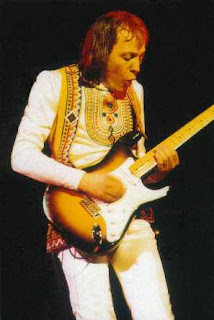 The first of several collaborations with former Cream bassist Jack Bruce, the horribly-titled 1981 album B.L.T. (named for Bruce, Trower, and drummer Bill Lordan), with its ill-conceived cover art (a bacon, lettuce, and tomato sandwich with raw bacon) remains one of Trower’s most critically acclaimed and commercially-accomplished albums (rising to #37 on the Billboard albums chart). With Bruce’s grittier, more soulful voice up front and his legendary fat-string guitar in the mix, B.L.T. successfully melds blues and rock with elements of jazz and funk. “No Island Lost” is a bombastic number that reminds of West, Bruce & Laing’s larger-than-life brand of blues-rock-on-steroids, Trower laying down some Hendrix-styled riffs that will singe your speakers. Bruce’s original song “Life On Earth” blends Cream’s dinosaur-rockin’ blues with a new wave edge, while the Trower/Reid composition “Carmen” is a beautiful piece with shimmering fretwork that remains part of the guitarist’s repertoire to this day.

Truce, released a year later, continued Trower’s artistically-satisfying collaboration with Bruce, this time with original Trower band drummer Reg Isidore (who had also played with Peter Green) on the cans. Stylistically, the album differs little from B.L.T., the performances mixing blues and rock with a few progressive elements and even strains of funk and soul. Recorded across two full days of intense session work, Truce brought out the best of all the players, and even the normally-pedestrian Isidore rises to the occasion and bounces rightly off of Bruce’s taut bass lines. The album also features a few Bruce/Peter Brown songs, the bassist teaming up with his old Cream songwriting partner for gems like the invigorating “Thin Ice,” Bruce’s vocal gymnastics matched by a spry syncopated soundtrack and Trower’s wiry guitar. Bruce and Brown tag-team with Trower on the fascinating “Last Train To the Stars,” the guitarist’s shimmering fretwork exploring new frontiers of sound while Bruce’s soulful, soaring vocals jump all over the place.

In 1983, Trower recorded his last album for Chrysalis, the hard rock collection Back It Up. Reuniting with vocalist Dewar, and sporting a fine new rhythm section in bassist Dave Bronze and drummer Alan Clarke, the album seemed an attempt to appeal to the heavy metal-crazed early ‘80s youth market, to no avail. Trower’s normal inclination towards a blues-oriented sound is downplayed here in favor of a straight-forward, six-string Sturm und Drang, and while tracks like the riffish “Black To Red,” the psychedelic-tinged “Benny Dancer,” and the beautiful, mesmerizing instrumental “Islands” evoke the Robin Trower of the early 1970s, it proved to be too little, too late for a generation fascinated by MTV and insipid British pop music. Back It Up would fail to crack the Billboard Top 100 albums chart, leaving Trower in the commercial wastelands for the rest of the decade until his U-turn to the blues during the 1990s.

Farther On Up the Road provides an intriguing coda to Robin Trower’s years with the Chrysalis label, preserving both the guitarist’s creative triumphs and musical missteps during the era. The three-disc set is worth the price of admittance (around $20 last I checked online), if only for the two albums recorded with Jack Bruce, which remain out-of-print in the U.S. and available only as a British import from our friends at BGO Records.

You can’t beat six Trower albums for the price of two, and for less than the cost of a night at the club, you can grab both Farther On Up the Road and A Tale Untold and have eleven vintage Trower albums in two nifty box sets! An innovative and imaginative guitarist who has taken blues music to new artistic heights, Robin Trower is one of the true giants of the blues-rock style. (Chrysalis Records/Capitol, released March 13th, 2012)