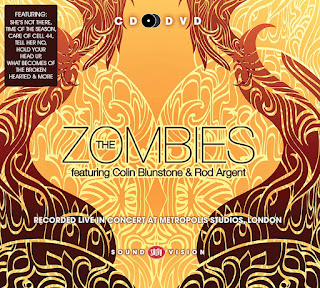 The Zombies offer up a textbook example of the magic of rock ‘n’ roll to create legend out of obscurity. Formed in the U.K. in 1961 by singer Colin Blunstone, guitarist Paul Atkinson, bassist Chris White, keyboardist Rod Argent, and drummer Hugh Grundy, the band was signed by Decca Records after winning a local music competition. They scored a hit single right out of the gate when the Argent-penned “She’s Not There” charted in both the U.K. and the U.S. in August 1964. The Zombies rode the British Invasion wave into the U.S. Top Ten with Argent’s “Tell Her No” later in ‘64, but half a dozen or so subsequent single releases failed to match the band’s earlier chart success, and Decca dropped the band in early 1967.

The Zombies had spent a couple years of hard touring across the United States, performing alongside folks like Dusty Springfield and the Searchers when they signed a last-gasp deal with CBS Records which resulted in what has since become known as the band’s magnum opus, the wonderful Odessey and Oracle. An inspired mix of the band’s British R&B roots and contemporary late 1960s psychedelic pop/rock with symphonic overtones, support by the label for the making of Odessey and Oracle was virtually non-existent. This forced the band to use a then-novel Mellotron to mimic orchestral passages because they couldn’t afford studio musicians on the miniscule recording budget provided by CBS. When the label demanded a stereo mix of the album (which was recorded in mono), Argent and White footed the cost themselves.


The album sank like a stone in the band’s homeland, and was only released in the U.S. because of support from Columbia Records A&R man Al Kooper, a talented musician and songwriter in his own right, who had bought a copy of Odessey and Oracle during a trip to London and recognized its brilliance. By the time of the album’s late 1968 U.S. release, the Zombies had already broken up and Rod Argent had begun forming his self-named hard rock band with Zombies bandmate Chris White…all of which made the unexpected success of “Time of the Season,” which would rise to #3 on the U.S. charts in late 1969, all the more awkward. The band members declined to tour in support of the album and hit single, resulting in at least three counterfeit versions of the band touring the states as “the Zombies” well into the 1980s. 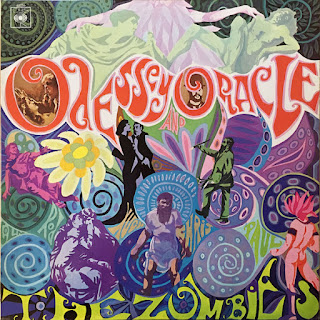 Somewhere along the line, though, that ol’ rock ‘n’ roll magic kicked in, and as new audiences discovered Odessey and Oracle, the album became a bona fide record collectors’ dream, a holy grail of 1960s-era psychedelic pop that commanded hundreds of dollars for an original vinyl copy. Music historians connected the dots between the Zombies and like-minded “sunshine pop” bands like Left Banke and the Millennium, while musicians like Paul Weller and Dave Grohl confessed their admiration for the band and its landmark album. In the wake of renewed enthusiasm for their work, three of the five original members reunited briefly during the 1990s to record a new studio album, mostly to retain their rights to the Zombies name.

In 2008, Blunstone and Argent got back together and re-formed the band with White and Grundy to celebrate the 40th anniversary of Odessey and Oracle with a series of live shows. The duo has been at it ever since, touring annually as the Zombies featuring Colin Blunstone and Rod Argent, the two joined by former Argent/Kinks bassist Jim Rodford and his son, drummer Steve Rodford, along with guitarist Keith Airey, who would be replaced by Tom Toomey by the time the re-vamped Zombies recorded their critically-acclaimed 2010 album Breathe In, Breath Out.

The Zombies’ Recorded Live In Concert At Metropolis Studios, London

In January 2011, the Zombies were invited to perform in front of a small, albeit enthusiastic “invitation only” audience in London’s Metropolis Studios, an intimate concert that was documented for the subsequent release of Recorded Live In Concert At Metropolis Studios, London, a two-disc audio/visual extravaganza certain to thrill the pants off of any longtime fans of the band. The CD and DVD offer up 19 tunes, most of ‘em bona fide classics, including six from Odessey and Oracle as well as the earlier hits, and even a couple of cuts from the Zombies’ most recent, Breathe In, Breath Out.

The show starts out with “I Love You,” a popular but failed 1965 single that features a distinctive riff and forceful melody. How can a “failed single” be popular, you ask? Well, it was originally released as the B-side to a meager U.S. single, “Whenever You’re Ready.” But the song would become a hit when it was later recorded by the California pop band People! in 1968, rising to #14 in the U.S. and working its way into the top ten in Japan (twice!), Mexico, Israel, the Philippines, and elsewhere. Decca reissued the Zombies’ original as a single in late ‘68 but it sank like a stone. Still, it’s remained one of the band’s more popular live songs, and here it’s provided a strong performance, with solid vocal harmonies, psychedelic fretwork, and plenty of Argent’s manic keyboard-pounding.

The band acquits itself nicely on the Jimmy Ruffin smash “What Becomes of the Broken Hearted,” which was a U.K. hit for Blunstone and keyboardist Dave Stewart (not the Eurythmics guy) back in 1981. With the band providing Motown-styled backing harmonies, Blunstone imbues the song with a longing and wistfulness that falls just short of Ruffin’s original. An odd instrumental interlude mid-song detracts somewhat from the performance, but Argent’s soulful keyboard riffing hits just the right note. Toomey’s guitar solo near the end is elegant and tasteful, extending the song to its short, discordant ending. “A Rose For Emily” is the first of a half-dozen songs pulled from Odessey and Oracle, a wan pastoral ballad that displays moments of Beatlesque melodic brilliance and interesting vocal harmonies.

Time of the Season

The audience is preternaturally patient waiting for the hits, and they get the first in the form of “Time of the Season,” an uncharacteristic song in light of the rest of the band’s more sedate psyche-pop milieu. With its familiar riff, unusual melody, chiming keyboards, and oblique lyrics it’s an instantly accessible tune and while it originally flopped as a 1968 single in the U.K. it would hit #3 in the U.S. and top the charts in Canada a year later. “Tell Her No” suffered a similar fate previously when released in 1964, hitting big in North America while the band’s hometown audience largely yawned. “Tell Her No” offers a similar syncopated melody and chorus, and the 21st century Zombies do it well, Blunstone’s soft lead vocals providing a counterpoint to the band’s almost overwhelming backing harmonies. It’s an engaging moment that thrills the audience. 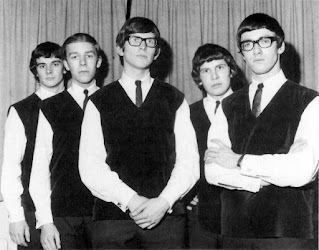 The last of the Zombies’ hit U.S. singles to be performed this night was also the band’s first, “She’s Not There” hitting #2 in the U.S. and Canada while charting at #12 in the U.K. In many ways, it would set the standard by which subsequent releases would be measured, which is why, perhaps, “Tell Her No” and “Time of the Season” rose above the band’s other singles in that they all share a distinctive harmonic vibe that stood out as different and innovative at the time. Performed here, the song lends itself to a lively Argent keyboard solo, with great vocal harmonies lending to the larger-than-life sound of the song. The classic rock radio standard “Hold Your Head Up” was Rod Argent’s biggest hit with his self-named band, the 1972 single hitting #5 in the U.S. and receiving constant radio airplay ever since.

The Zombies’ version here of “Hold Your Head Up” is stretched out and definitely over-the-top, allowing Argent to bang away at the keyboards with reckless abandon, his vocals assisted by the band’s harmonies on the chorus while Toomey delivers the song’s timeless guitar lick. Although the audience came to hear the hits, the Zombies had a lot of good-to-great songs that never received their due. “I Don’t Believe In Miracles,” from the band’s 1991 reunion album, is a bittersweet ballad that features a strong vocal turn, beautiful harmonies, a melancholy melody, and finely-crafted lyrics. “Care of Cell 44” is a deceptively catching slice of sunshine pop with a uniquely British ambience and instrumentation similar to colleagues the Kinks while “Beechwood Park,” at times, reminds of Procol Harum with classical-tinged baroque instrumentation and somber yet effective vocals.

While some 1960s-era bands touring the oldies circuit these days are living entirely on past glories, you can’t say the same of the Zombies. Sure, Recorded Live In Concert At Metropolis Studios, London strikes all the highlights of the band’s career for an appreciative audience, but the hits are a small part of the 19 inspired performances caught on audio and video that night. There’s a reason why Odessey and Oracle is considered a rock ‘n’ roll classic, and it has a lot to do with the depth of the band’s songwriting chops, their instrumental prowess, and their often whimsical imagination, all of which are on full display on both the CD and DVD of Recorded Live In Concert At Metropolis Studios, London. (Convexe Entertainment, released May 24th, 2012)