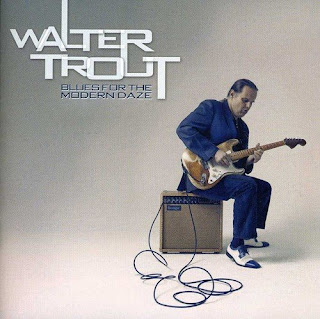 Guitarist Walter Trout has always been a working bluesman, a journeyman musician that dutifully put in his time with bands like Canned Heat and John Mayall’s Bluesbreakers, as well as playing behind legends like Big Mama Thornton and John Lee Hooker before launching his own solo career in 1990. Through the years, and despite the ups-and-downs that a lengthy career will bring, Trout has seemingly remained humble, and always excited to climb on stage and perform.

A few years back, however, Trout began a transformation, subtle at first, but picking up steam through albums like 2008’s The Outsider and the 2009 compilation Unspoiled By Progress, featuring the new track “They Call Us the Working Class.” With the release of his 21st album, Blues For the Modern Daze, Trout’s evolution seems complete – the singer, songwriter, and guitarist is now the populist voice of the blues, following in the footsteps of artists like Big Bill Broonzy, J.B. Lenoir, and Blind Willie Johnson, whose influence on these songs Trout has frequently cited.


Blues For the Modern Daze opens with the scorching “Saw My Mama Cryin,” a high-flying bit of bluesy social commentary that provides anguished insight into the working class struggle. Trout’s tortured vocals convey heartfelt emotion while his guitar weeps and moans and screams with some intensity. Trout’s solos here cut deep as the band delivers a solid groove, and the song rocks and rolls itself to an inevitable conclusion. By contrast, “Lonely” is no less powerful a performance, the mid-tempo ballad-like rocker featuring a nuanced vocal turn and mournful guitar licks. Although it’s a fine showcase for Trout’s exemplary six-string skills, it’s also a solid example of his songwriting chops and underrated, potent vocals.

The doom-and-gloomish “The Sky Is Fallin’ Down” is a cautionary tale with a bonfire soundtrack that nearly rages out of control as Trout levels accusations and proffers his advice in the face of impending disaster, his dark lyrics matched by incendiary fretwork that threatens to ignite your speakers with its red-hot riffs, notes sparking from the fretboard. Trout’s “Blues For My Baby” is a more traditionally-styled tune, with gorgeous piano tinkling behind the guitarist’s smoky string-pulling. Close your eyes while listening to this one and you could easily believe that you’re sitting in a West Side Chicago club circa 1964 or so listening to Magic Sam or Otis Rush wail on the blues.


Lifestyle of the Rich and Famous


For old-school classic rock fans, “Recovery” is a real find, Trout channeling his inner Robin Trower with a phenomenal six-string performance that matches Trower’s swirling, Jimi Hendrix-inspired psychedelic-blues sound with a 1970s-styled, openly atmospheric blues-rock sound. A tale of romantic woe, “Recovery” literally wears its heart on its sleeve, the song drenched in the pathos of Trout’s effective, emotional vocals and imaginative fretwork. “Turn Off Your TV” is both insightful and humorous, Trout delivering a rollicking vocal performance above a slight boogie refrain, his lyrics pointing to the hypocrisy of commercialization and the overall absurdity of much of what one witnesses on the tube. Trout’s guitarwork here is more upbeat and less provocative, delivered with energy and vigor while his hoarse vocals reinforce the song’s themes.

Trout continues in his populist vein with “Lifestyle of the Rich and Famous,” a slow-burning blues tune with deliberately-paced guitar riffs and the constant joyful din of rolling piano notes on this reverse “rags-to-riches” tale that cautions the wealthy1% that life isn’t always a bowl of cherries, and that what goes up may one day come back down to earth. Trout’s solos on the song are stunning, rich with tone and sharp-edged, infused with the spirit of the blues while still rocking hard.


The odd, albeit poetic spoken word piece “Puppet Master” offers Trout’s somber vocals hauntingly applied above an evil keyboard riff, the brief interlude leading into the rampaging “Money Rules the World,” a spot-on lyrical condemnation of the effect of unbridled wealth and corporate interference on the fate of the average person. A virtual theme song for the “Occupy” movement, Trout layers on the blues with delightfully-tortured guitarplay which frantically fire-dances above the song’s locomotive rhythms. It’s a 21st century rocker worthy of Hendrix but offering a contemporary blues edge. “Brother’s Keeper” is in a similar vein, a mid-tempo rocker with a gospel frame of mind that calls out the self-righteous in no uncertain terms, Trout’s flamethrower guitar solos throwing fuel on an already out-of-control blaze.

The title track of Blues For the Modern Daze displays the Blind Willie Johnson influence that Trout mentions in talking about the album; the song an effective bit of intelligent social commentary delivered with an undeniable Delta blues vibe and gospel fervor. Trout’s acoustic guitar strum gives way to squalls of cyclone-strength electric riffs, the singer shouting and screaming above an apocalyptic tango that reminds of Charley Patton’s “High Water Everywhere” with its doomsaying lyrics and powerful instrumentation. The album ends with “Pray For Rain,” a comparatively gentle performance delivered in an acoustic country-blues style that is no less effective for its seemingly innocent nature. Beneath Trout’s spirited guitarplay and wailing vocals, however, you’ll real concern and some metaphorical hard questions without easy answers.


In the spring of 2012, a lot of words have been spilled out in print and online talking about Bruce Springsteen’s Wrecking Ball and the album’s frequently vague political and social commentary. While I’m not going to diss on the Boss, I’d argue that another New Jersey native has delivered the essential protest album of the year.

Walter Trout’s Blues For the Modern Daze is smart, insightful, and 99% to its core, displaying an undeniable populist viewpoint while retaining the guitarist’s trademark turbocharged blues-rock sound. As a songwriter, Trout has never been better, and his voicing of his social concerns – bolstered by an unbridled six-string rage – is delivered with plenty of heart and soul. This is Walter Trout at his very best, and we should all be listening… (Provogue Records, released April 24th, 2012)

Buy the CD from Amazon: Walter Trout’s Blues For the Modern Daze