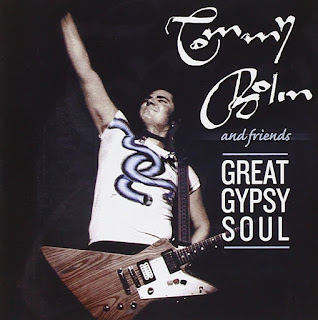 The late Tommy Bolin is one of the great lost guitar heroes of the 1970s. A player of amazing vision and imagination, Bolin was equally versatile in a diverse range of styles, whether it was blues, hard rock, funk, or freewheeling jazz, and he did so with an incredible fluidity of tone and emotion in his playing. From his roots with the blues-rock band Zephyr and his ground-breaking session work on Billy Cobham’s fusion classic Spectrum, to a two-album stint with the James Gang (replacing Domenic Troiano, who himself had replaced Joe Walsh) and a brief tenure with Deep Purple (admirably filling Ritchie Blackmore’s shoes), Tommy Bolin brightened up every recording he touched.

Tragically, Bolin’s fledgling solo career was derailed by a heroin overdose in 1976, with only two proper studio albums – 1975’s Teaser and the following year’s Private Eyes – released during his lifetime. His younger brother Johnnie, himself a musician, has kept the flame burning through all the years since Bolin’s tragic death, and there have been a wealth of posthumous releases showcasing Bolin’s six-string skills in both live and studio settings released under the Tommy Bolin Archives label. Among the best of these is the Live At Ebbets Field album, which documents a 1974 performance by Bolin’s post-Zephyr band Energy, with the guitarist proving himself the bridge between Jimi Hendrix’s jazzier six-string excursions and Jeff Beck’s later jazz-rock fusion.

There have also been a number of Bolin tribute albums released over the years. Great Gypsy Soul is the latest of these tributes designed to cement Bolin’s status, albeit with an interesting twist. Working from unreleased outtakes and alternate versions of songs previously recorded by Bolin, producers Greg Hampton and Warren Hayes brought in a cast of talented guest musicians to add their instrumental flavor to Bolin’s original vocals and guitar. The resulting effort is credited to “Tommy Bolin and friends.”

Other tracks fail to impress, however, Peter Frampton’s take on “The Grind” lacking something seminal in its execution, while Myles Kennedy – singer with former Guns N’ Roses guitarist Slash’s band – falls flat on his face on Bolin’s “Dreamer,” a performance only partially redeemed by Nels Cline’s (too) sublime fretwork. Aerosmith’s Brad Whitford adds bombast to Bolin’s “Wild Dogs” where the late guitarist would have brought stealth, and even the great Warren Haynes experiences a rare misfire in taking on Bolin’s signature tune “Teaser.” Guitarist John Scofield seems entirely lost here, while Lukather seems to be still trying to find his way to the studio with a lukewarm reading of “Homeward Strut.” Bolin’s work is too often overshadowed by the contributions of his “friends,” and the listener would be better off slapping a well-worn vinyl copy of Private Eyes on the turntable.

If you’re already a Bolin fanatic, you’re probably going to want to grab a copy of Great Gypsy Soul; I’m telling you that you should resist the urge to spend your money on an album that adds absolutely nothing to the guitarist’s legacy. I realize that there’s a legitimate dearth of quality Bolin material available, but you’d be better served in spending your money on one of the guitarist’s incredible ventures into the world of jazz-rock fusion, notable among these Billy Cobham’s Spectrum and/or Alphonse Mouzon’s Mind Transplant.

On the other hand, if you’re a newcomer to the Tommy Bolin mystique, pass this one by in favor of one of the several variations of Teaser that you’ll find available; even with a myriad of dodgy demo tracks and raw alternate takes on expanded versions of Teaser, you’ll fare better than you will with Great Gypsy Soul if you’re looking to discover Bolin’s enormous charms. (429 Records, released March 26th, 2012)