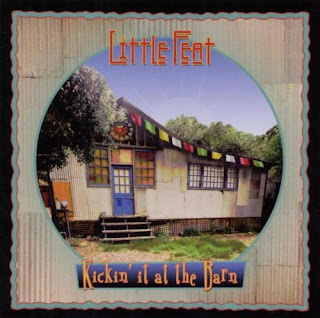 Formed in 1969 by singer/songwriter Lowell George, a veteran of Frank Zappa’s Mothers of Invention, Little Feat was a group of skilled musicians whose abilities were surpassed only by their eclectic collective tastes. Taking a cue from the roots-rock approach of the Band, Little Feat effortlessly blended rock, country, blues, and anything else that struck their fancy. This melting pot approach to making music struck a chord with critics and attracted a hardcore fan following, and if the band’s early-to-mid-‘70s albums didn’t exactly light up the charts when released, they’ve withstood the test of time. Thirty years later, most of ‘em remain in print.

The loss of a creative voice as unique as George’s would derail most bands and Little Feat was sidelined for a while after its founder’s death in 1979. The core of the original line-up reformed in 1988, and sixteen years later the band remains a popular concert draw and continues to make interesting new music. Kickin’ It At the Barn is Little Feat’s 14th studio album and it shows a band still willing to experiment, to try something new. Little Feat takes an “anything goes” approach to recording, throwing everything but the kitchen sink into the album’s stylistic stew.

Kickin’ It At the Barn has its share of funky rockers like “In A Town Like This” that feature the band’s trademark Dixie-fried, roots-rock sound. The album also offers soulful ballads like “Heaven Forsaken” and  “I’d Be Lyin’.” The cornerstone of Kickin’ It At the Barn, though, is the eight-minute “Corazones y Sombras,” a Spanish folk song that offers proof of the band’s instrumental prowess. Accompanied by some fine Mexican musicians, it’s a joyful performance, grounded in tradition and reveling in a shared musical language.

Kickin’ It At the Barn doesn’t break much new ground but then again, with as much ground as Little Feat covers on the album, it doesn’t really have to... (Hot Tomato Records, released October 31st, 2003)

Buy the CD from Amazon: Little Feat’s Kickin’ It At the Barn