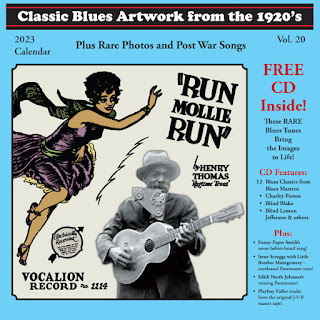 Another year is coming to a close and, yes, it’s time for the Reverend to preach his annual sermon on the joys of having a Blues Images calendar hanging on your wall. The 2023 calendar is now available and, much as with previous years, John Tefteller and his Blues Images crew have outdone themselves with another great effort!

For those of you unfamiliar with Mr. Tefteller’s annual gift to blues fans, the Blues Images calendar features vintage advertising artwork from the long-gone, legendary Paramount Records label. Each year’s calendar preserves an invaluable slice of visual history of the early years of the blues. Whereas previous publications have skewed more heavily towards early, primitive B&W pen ‘n’ ink artwork, last year’s calendar included more photo-oriented advertising. This year’s banger does even better, with several photographic ads (reproduction technology was in its infancy in the 1930s) as well as more than a few splashes of color.

The Blues Images 2023 calendar cost slightly more than some cheap wall-hanger you’d buy from the mall or local bookstore, but for the hardcore blues fan, Tefteller packs a lot of value for the $29.95 (plus shipping) it costs. Each Blues Images calendar includes a full-length CD that features rare, impossible-to-find, and often one-of-a-kind tracks, many of them sourced from Tefteller’s extensive personal collection. The performances, which include the songs from the original advertising in the calendar as well as related releases, have been remastered from the original 78rpm records using the ‘American Epic’ digital process that makes the sound on these antique shellac marvels really pop out of your speakers. 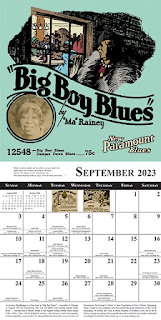 This year’s accompanying CD features recordings from the 1920s and ‘30s, a fine selection that includes the aforementioned sides featured in the monthly advertisements, as well as too-cool-for-school obscurities like “Funny Paper” Smith’s 1930 track “Old Rounder’s Blues”, Brother Fullbosom’s 1931 gospel-blues “A Sermon On A Silver Dollar”, and Texas Alexander’s 1928 side “Blue Devil Blues”. Since there are only twelve months in a year, and that’s too few songs to fill out a complete CD, Tefteller has dipped into his vast record collection to include several rare tracks recorded in 1953 by ‘Playboy Fuller’, a pseudonym for bluesman Louisiana Red (a/k/a Iverson Minter). There are also songs by Scrapper Blackwell (1930’s “Springtime Blues”), Edith North Johnson, Memphis Willie Borum, and Pete Franklin, among others, 25 tracks total. The CD closes with the bittersweet “I’m Going Away Blues” by Frank Stokes.

The annual Blues Images calendar and CD is a “must have” addition to the collection of any serious old-old-school blues fan. Blues Images sells other cool blues-related stuff, too, like posters, t-shirts, CDs from previous years, and past years’ calendars. Sadly, as Tefteller writes in the intro to the 2023 calendar, this will be the last calendar after publishing annually for 20 years. A dwindling market for this sort of thing, plus the increased cost of printing and distributing makes the yearly labor-of-love a money-losing proposition. There are many of us who are going to miss the annual calendar, but you can still grab some blues music swag from the Blues Images website. Tell John that “the Rev sent ya!”
Posted by Rev. Keith A. Gordon at Friday, October 28, 2022