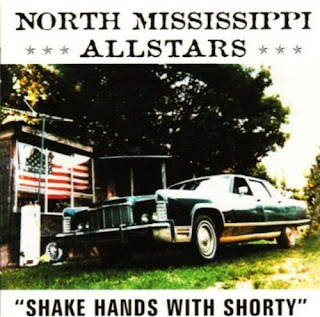 Must be something in the water down there, some sort of magic that seeps out of the river into wells and springs across northern Mississippi. It starts down around Clarksdale and reaches as far north as Memphis, but something is surely going on ‘cause this small region has produced some of the damn finest musicians that you’ll ever hear play. You’ll find a trio of them in the North Mississippi Allstars, one of the hardest rocking electric blues bands you’ll find on the planet. Brothers Luther and Cody Dickinson – the real “Blues Brothers” – and bassist Chris Chew have kicked around in various northern Mississippi bands for years now. They’ve hit the proverbial bull’s eye tho’ with the release of Shake Hands With Shorty, their phenomenal debut album.


With a help with some friends like Garry and Cedric Burnside (the other “Blues Brothers” and sons of Hill Country blues great R.L.), Alvin Youngblood Hart, East Memphis Slim, and Otha Turner, the Allstars kick out ten fine blues tunes on Shake Hands With Shorty. They don’t stray too far from what they know best, drawing their material from talents like “Mississippi” Fred McDowell, R.L. Burnside, Junior Kimbrough, and Memphis legend Walter “Furry” Lewis. They embroider this classic material with a few instrumental flourishes, creating an original and individual sound that should appeal equally to blues purists and rockers alike.

Guitarist Luther Dickinson, in particular, draws a favorable comparison to the elder Burnside, playing his axe with the same sort of bent-string technique as the blues statesman. You’ll also hear strains of Stax soul, Duane Allman and Stevie Ray Vaughan in the material, the resulting clash of rock and blues influences branding the band as unique. The brothers Dickinson come by their roots honestly – their old man Jim is a legendary musician and producer and the brothers have grown up among some of the most creative and original artists in American music. The results of their unusual childhood shines brightly throughout Shake Hands With Shorty, a highly recommended first effort from the Northern Mississippi Allstars. (Tone Cool Records, 2001)