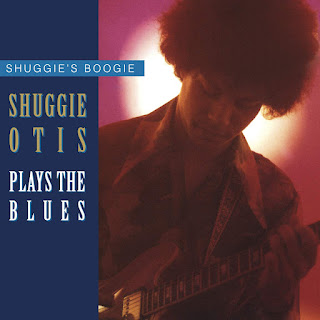 Although there have been a handful of young guitar prodigies since that time, the late ‘60s emergence of fourteen year old six-string wizard Shuggie Otis was unheralded at the time. The son of R & B legend Johnny Otis, Johnny, Jr. – known as Shuggie – was discovered by the great John Hammond and signed to Epic Records. An enthusiastic Al Kooper featured Otis on one of his “super session” records soon afterwards, the young Otis making his recording debut in 1969 with Al Kooper Introduces Shuggie Otis.

Soon to follow was 1970’s Cuttin’ Up by Johnny Otis, which featured his multi-talented son on a number of cuts, playing a variety of instruments, including guitar, bass and keyboards. Later in the year came Shuggie’s full-fledged solo debut, Here Comes Shuggie Otis, on which he performed all of the instrumentation save for bass guitar and wrote or co-wrote all of the disc’s ten cuts. The critically-acclaimed album was a breath of fresh air, with the unique blues-based guitar style evinced by Otis ground-breaking in its scope and surprisingly mature in its execution. Otis would go on to record a total of three solo albums for Epic in the early 1970s, as well as continuing to do live work with his father’s band.

Shuggie’s Boogie draws its dozen cuts from the first two solo albums from Otis and his aforementioned work with Kooper and the elder Otis. It showcases an artist wise beyond his tender years, the work representing a striking stylistic ability and an enormous power of expression. Cuts like “Shuggie’s Boogie,” with its brief opening spoken autobiography, “I Can Stand To See You Die,” its country-styled slide guitar matched by the wonderful vocals courtesy of Sugarcane Harris, or “Shuggie’s Old Time Slide Boogie,” which brings up memories of Tampa Red or, more appropriately, Blind Willie McTell, all stand up well to the test of time. Shuggie’s subsequent slide into obscurity makes these early achievements all the more impressive. During his brief career, Shuggie Otis left a large mark on the blues, his youthful enthusiasm and skill captured here on Shuggie’s Boogie: Shuggie Otis Plays The Blues. (Sony Legacy Recordings, released 1994)