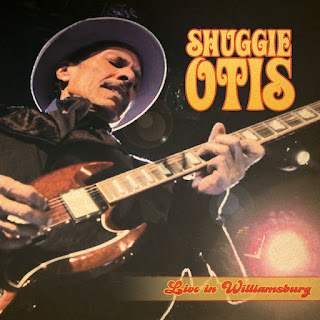 Shuggie Otis, the son of R&B legend Johnny, was a true musical prodigy, the guitarist recording his first album at 16 and retiring from the rigors of the biz by age 30 with a handful of classic recordings comprising his canon. With the 2013 reissue of Otis’s landmark 1974 album Inspiration Information (which included Wings of Love, a bonus disc of unreleased recordings), Otis went back on the road after a three-decade hiatus, performing with a band that included his brother Nick on drums and son Eric Otis as second guitar. Live In Williamsburg offers a snapshot of a single performance from the guitarist’s “comeback” concerts, the document a welcome reminder of Otis’s unique musical voice and enormous talent.

Otis runs through a dozen of his best songs on Live In Williamsburg, the performances ranging from the soulful groove of Inspiration Information or the Chicago-styled, guitar-driven electric blues of "Sweetest Thang" to the psychedelic soul of "Wings of Love." The guitarist’s signature "Shuggie’s Boogie" displays Otis’s deft hand at traditional blues guitar while the exotic "Aht Uh Mi Hed" blends reggae rhythms with lush fretwork, wistful lyrics, and bleating horns to create a new R&B sound. Otis is best known, perhaps, for the sly funk of "Strawberry Letter 23," the song a 1977 Top Ten chart hit for the Brothers Johnson. Here Otis tones down the song’s rhythmic backbone slightly in favor of shimmering instrumentation and soulful vocals, creating a transcendent musical moment. Otis’s vocals and guitar playing show little or no rust here, displaying the same livewire electricity as his groundbreaking 1970s work, albeit tempered with experience and wisdom. (Cleopatra Records, released October 14, 2014)

Review originally published by The Blues magazine in the U.K.

Buy the CD from Amazon.com: Shuggie Otis's Live In Williamsburg
Posted by Rev. Keith A. Gordon at Sunday, April 15, 2018