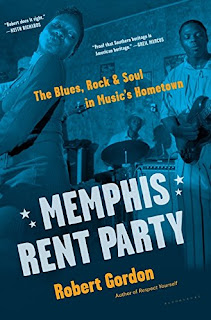 Grammy® Award-winning writer, filmmaker, and music historian Robert Gordon (no relation) is the author of some of my favorite books on music, including It Came From Memphis, Respect Yourself: Stax Records and the Soul Explosion, and Can’t Be Satisfied, the very best Muddy Waters bio, bar none. Born and raised in Memphis, Tennessee, Gordon has spent 30+ years writing about Southern art and music, with an emphasis on his hometown sounds and the talented and eccentric artists who make the music. With his latest effort, Memphis Rent Party, Gordon digs into his archives to spin a paean to the rich musical heritage of the Bluff City.


Gordon’s Memphis Rent Party is a collection of essays, many of them previously-unpublished, that cover the gamut of musical styles and larger-than-life personalities that make Memphis a virtual breeding ground for unique and exciting American music. Although, in my opinion, Gordon shorts bluesman Furry Lewis (one of my longtime faves) by relegating him to the book’s preface, the remainder of Memphis Rent Party more than makes up for this relative oversight by covering both non-musical trailblazers like Sam Phillips, founder of Sun Records, and outsiders like the late Jeff Buckley and indie-rock darling Cat Power whose fates are inextricably linked to the city on the big Mississippi River.

I admittedly brought a fair degree of familiarity with many of the musicians that Gordon profiles here, as I have also written about artists like Alex Chilton, Junior Kimbrough, Jim Dickinson, and Robert Johnson throughout my 45 years as a music journalist. Still, Gordon fills in the edges with insightful anecdotes courtesy of a personal history with many of his subjects, and chapters on all of the aforementioned provide a greater understanding of their music or, in the case of Dickinson (an underrated figure in rock ‘n’ roll overall, IMHO), deeper knowledge of the individual. His chapter on Jerry Lee Lewis provides a deep assessment of the rock legend’s life and career without actually interviewing the subject, while Gordon’s conversation with singer Cat Power swings the pendulum in the exact opposite direction, providing a starkly revealing glimpse at the artist’s psyche.

Where Memphis Rent Party really shines, for this reader, is in Gordon’s tales of the eccentric and original talents that make Memphis a musical melting pot that has long struggled for the respect the city deserves. Gordon paints soul singer James Carr as the tragic figure that he was, while an interview with Mama Rose Newborn – wife of Phineas and mother of Phineas, Jr. and Calvin – provides all three of these incredibly talented musicians with long overdue accolades. Gordon’s beleaguered friendship with the troubled singer/songwriter Jeff Buckley ends with his accidental death while his brief relationship with career criminal Jerry McGill results in a tense but ultimately satisfactory conclusion. Chapters on the Fieldstones and Otha Turner are, realistically, field reports by an intrepid reporter and outsider offering a glimpse behind the curtain to reveal an enticing musical culture.


Overall, I have few arguments with Gordon’s editorial choices for Memphis Rent Party. I’d like to have seen a chapter on garage rocker Greg Cartwright and his various bands (Reigning Sound, Compulsive Gamblers, the Oblivians); perhaps something more on the talented Sid Selvidge, a friend of Jim Dickinson and a member of his Mud Boy and the Neutrons band; or perhaps something on sonic terrorist Alicja Trout and her various garage-punk bands (Lost Sounds, River City Tanlines). But those are minor cavils; there’s more than enough meat on the bone here to satisfy any free-thinking music fan.

An appendix to the book offers plenty of information on further reading (including Peter Guralnik’s excellent books on soul music and Elvis) and a couple dozen LPs and CDs of Memphis music well worth your while to track down. If you want to take the easy way out, Fat Possum Records has released a vinyl-only compilation with songs by many of the musicians featured in Memphis Rent Party. Overall, Gordon does an impressive job in capturing the grease, sweat, and heartbeat of Memphis music on the pages of Memphis Rent Party, and you can’t really ask for nothing more from this literary love letter to the writer’s hometown. Grade: A+ (Bloomsbury Publishing, published March 6th, 2018)