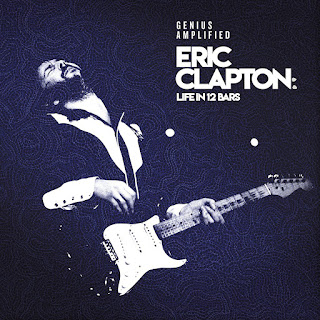 There can be little argument about guitarist Eric Clapton’s enduring influence on the blues and rock music. From his short-but-sweet tenure with British blues-rock pioneers the Yardbirds and his even shorter stint with John Mayall’s Bluesbreakers during the early ‘60s to the formation of Cream, one classic album each with British rock “supergroup” Blind Faith and with Derek and the Dominos, and an acclaimed solo career that continues to this day, Clapton has enjoyed a legendary career. Eric Clapton: A Life In 12 Bars, a documentary film about the guitarist by Oscar® winning director, Lili Fini Zanuck, is currently showing on the Showtime premium cable network.

On June 8th, 2018 Universal Music will release the soundtrack to the film, Life In 12 Bars available as a two-CD or four-LP set as well as a digital download (the vinyl set will be released on July 20th). The set’s 32 songs span the entirety of the eighteen-time Grammy® Award winner’s storied career, featuring tracks by all of the aforementioned bands as well as session recordings of Clapton playing alongside fellow legends like the Beatles, George Harrison, and Aretha Franklin as well as songs by Muddy Waters and Big Bill Broonzy that inspired Clapton. The set includes five previously-unreleased tracks, including a 17-minute-long live 1968 performance by Cream of “Spoonful” and two Derek and the Dominos songs, including a live 1970 performance of Jimi Hendrix’s “Little Wing.”

The set also includes a pair of unreleased solo tracks from 1974 include the first release of the entire full-length recording of Bob Marley’s “I Shot the Sheriff” (running nearly seven minutes) and a live performance of Chuck Berry’s “Little Queenie.” Alternative mixes of “After Midnight” and “Let It Rain,” both from Clapton’s self-titled 1970 solo debut album, were produced by the late Delaney Bramlett and Tom Dowd, and Life In 12 Bars also includes a rare live track by Delaney & Bonnie & Friends featuring Clapton on guitar. Altogether the album is a fairly comprehensive overview of the career of one of the most influential guitarists that rock music has ever seen.

Buy the CD from Amazon.com: Eric Clapton's Life In 12 Bars