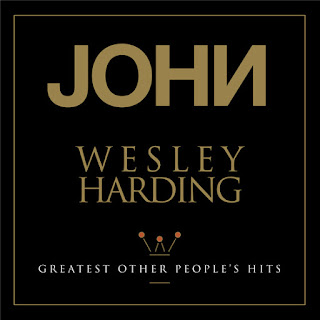 OK, so they’re not exactly John Wesley Harding’s “greatest hits,” but they were hits for somebody. On May 18, 2018 Omnivore Recordings will release Harding’s Greatest Other People’s Hits album on CD and as a digital download. The seventeen-track collection features Harding, née Wesley Stace, tackling songs by artists as diverse as Bruce Springsteen, George Harrison, Madonna, Roky Erickson (!), Madonna, and Peter Seeger, among others.

A limited-edition ten-track version of Greatest Other People’s Hits was released on vinyl for Record Store Day this year and featured collaborations with artists like Bruce Springsteen, Eric Bazilian (The Hooters), the Universal Thump, Fastball, and the Minus Five. The expanded CD and digital version of the album includes performances with Lou Reed, Kelly Hogan, Rick Moody, and Elizabeth Barraclough.

Using the stage name “John Wesley Harding,” Wesley Stace emerged as one of the finest singer/songwriter talents on the 1980s rock scene, scoring a handful of hits on college radio with songs like “The Devil In Me,” “The Person You Are,” and a unique cover of Madonna’s “Like A Prayer.” During the ensuing years, he has released better than 20 albums and four novels. In a press release for the new album, Stace says “you can write quite as good and accurate a narrative of a musical career through the covers sung as the songs written. Often, I’ve found people like the covers more, which may speak for itself, but I’ve always found it a compliment: covers are my strong suit.”

John Wesley Harding's Greatest Other People's Hits tracklisting:
1. If You Have Ghosts
2. Words Words Words – with The Minus Five
3. Star – With Fastball
4. Je Suis Venu Te Dire Que Je M’en Vais
5. Jackson Cage
6. Story Teller
7. Need I Know
8. It’s Only Make Believe – with Kelly Hogan
9. Old Bourbon – with Rick Moody
10. Benedictus – with Eric Bazilian
11. Another Age
12. Wah Wah – with The Universal Thump
13. Wreck On The Highway – with Bruce Springsteen
14. Covered Up In Aces – with Elizabeth Barraclough
15. Think It Over
16. Satellite Of Love – with Lou Reed & Rob Wasserman
17. Like A Prayer