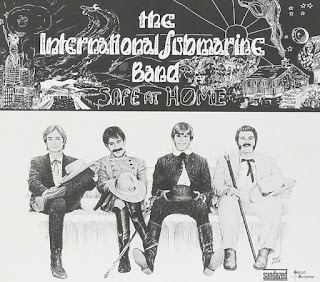 Singer, songwriter, and guitarist Gram Parsons is widely considered to be the de facto ‘Godfather’ of country rock and the spiritual forefather of the ‘90s Americana movement for his influence on the making of the Byrds’ landmark Sweetheart of the Rodeo album as well as his later work with the Flying Burrito Brothers and a pair of acclaimed, long-enduring solo albums. Long before Parsons became the avatar of what would long be called “Cosmic American Music,” however, he was a member of the International Submarine Band.


The ISB only released a single album, 1968’s Safe At Home, but its unique and progressive sound – a hybrid of traditional country, folk, rock, and R&B influences – would echo over the decades. Parsons was a theology student at Harvard University in 1965 with an eye towards becoming a folk singer when he met guitarist John Nuese, who turned him onto country legends-in-the-making like Buck Owens and Merle Haggard. Parsons had allegedly originally turned his nose up at country music, but he quickly bought into the idea of fusing country and rock together, and thus the International Submarine Band was born.

With Parsons and Nuese joined by bassist Ian Dunlop and drummer Mickey Gauvin, the ISB gigged around Boston for a while without making a real splash, eventually moving to New York City in early 1967. While in the Big Apple, the band recorded a pair of singles for Goldstar Records as well as a full-length album that was never released and subsequently lost to the ages. A move to Los Angeles brought new possibilities for the band, which eventually fell apart due to a lack of gigs and subsequent shortage of money – Parsons’ trust fund allowed him to live in relative comfort while his bandmates struggled, financially – so by the time that the International Submarine Band entered the studio under the patronage of producer Lee Hazelwood, only Parsons and Nuese remained.


Suffering from performance anxiety, Nuese struggled to find his footing in the studio, prompting Parsons to bring in his new pal Bob Buchanan of the New Christy Minstrels to play guitar and an old friend from Boston, Jon Corneal, on drums. They were joined on initial recording sessions by Wrecking Crew bassist Joe Osborn and guitarist Glen Campbell, pedal steel wizard Jay Dee Maness, and pianist Earl Ball, with Hazelwood’s girlfriend Suzi Jane Hokum producing. Later sessions would include future Burrito Brothers bassist Chris Ethridge on bass. This grouping of abundant talent would cobble together nine songs, a mix of Parsons’ originals and traditional country tunes that would virtually define “Cosmic American Music,” a sort of rock-influenced, folk-inspired country sound that Parsons’ would further refine with his solo albums.

By the time that Safe At Home was ready to release, however, Parsons had lit out for the Byrds, leaving his erstwhile bandmates in the lurch. Hazelwood and Parsons would come to an agreement, and the album was released without publicity (or much promotion) by Hazelwood’s LHI Records in March 1968, promptly sinking like a stone. Although critics generally praised the collection, others found it to be a featherweight contender next to similar efforts that year by Moby Grape, the Band, and even Parsons’ short-lived tenure with the Byrds. There’s a lot to like about Safe At Home, though, in spite of the album’s brevity (clocking in at less than 30 minutes). Parsons’ original “Blue Eyes” is a true-to-traditional country twang ‘n’ banger that could easily pass for a long-lost Buck Owens’ single while a cover of Merle Haggard’s “I Must Be Somebody Else You’ve Known” is framed by Maness’ weeping pedal steel and offers an appropriately lovelorn Parsons vocal performance.


Johnny Cash’s classic “Folsom Prison Blues” is brilliantly mashed together with Arthur “Big Boy” Crudup’s “That’s All Right” into a sort of mondo medley of country and R&B with funky rhythms akimbo yelping vocals, Ball’s honky-tonk piano, and staccato fretwork. Another Cash gem, “I Still Miss Someone,” is provided an emotional vocal performance that captures all the romantic yearning of the original, Parsons’ efforts greatly assisted by Ball’s sparkling ivories and Maness’ stirring pedal steel guitar.

Another Parsons’ original, “Luxury Liner,” foreshadows the sort of pop-oriented country sounds that former Monkees member Michael Nesmith would pursue on albums like 1970’s Magnetic South. The song would later be recorded by Parsons’ acolyte Emmylou Harris, but here the song is provided a slow fade-in and locomotive rhythms rambling beneath Parsons’ high lonesome vocals, with striking guitar playing and an undeniable melody creating the perfect fusion of alt-country rebellion and pop music sensibilities that might have been a hit had Hazelwood had cared enough to promote the album. The 2014 Sundazed Records CD reissue of Safe At Home, remastered from the original two-track stereo tapes, includes a very cool ‘lost’ track in “Knee Deep In The Blues,” which evokes the early work of Hank Williams or Johnny Cash with tear-jerk vocals, a subdued instrumental soundtrack, and a few lonesome guitar licks.


“Hindsight,” as the old adage reads, “is always 20-20,” and that pretty much sums up the International Submarine Band’s Safe At Home. On its surface, the album is an entertaining blend of country and rock sounds, with more twang than bang for your buck, if you catch my meaning. Parsons had yet to take the audacious artistic steps that he’d later show with Sweetheart of the Rodeo, or the major leap forward that he would with the Flying Burrito Brothers’ adventuresome 1969 debut, The Gilded Palace of Sin.

Some folks would argue that Parsons invented country-rock with Safe At Home, and some folks would argue otherwise, citing bands like Buffalo Springfield, the Nitty Gritty Dirt Band, and even the Grateful Dead who were exploring similar aesthetic turf at the time. At its heart, Safe At Home is a paean to the country music tradition that Parsons would later drag, screaming and kicking, from its safe 1950s home into the ‘70s and beyond with his innovative later work. The ISB was an important first step in Parsons’ evolution and influential far beyond its meager commercial showing, inspiring artists like Terry Dolan, Michael Nesmith, Michael Martin Murphy, and even Uncle Tupelo to wander down the lost highway in search of musical truth. (Sundazed Records)

Buy the CD from Amazon.com: The International Submarine Band’s Safe At Home
Posted by Rev. Keith A. Gordon at Sunday, April 08, 2018