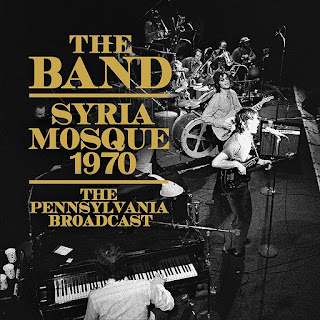 Thanks to the vagaries created by loopholes in international copyright law, it seems that live music from the 1970s and early ‘80s – particularly FM radio broadcasts – are fair game for release on CD by dodgy European labels. The situation is a godsend for rock ‘n’ roll fans, who now have access to budget recordings by their favorite artists that were only previously available as higher-priced bootleg titles.

For this month’s “Bootleg Rodeo” column, the first in a couple of months, the Reverend reviews recent releases by the Band, the Nitty Gritty Dirt Band, and the team of John Hiatt and Ry Cooder, with links to buy ‘em (or not) from Amazon.com.

The Band – Syria Mosque 1970 (Zip City Records)
The Band’s self-titled 1969 sophomore album would vault the rustic rockers and former Dylan backing band into the Top Ten in the U.S. and Canada on its way to selling better than a million copies. Fueled by the Top 30 hit single “Up On Cripple Creek,” the album turned heads and created expectations for what the Band would do to follow up their success. The answer came less than a year after the release of The Band in the form of Stage Fright, a complex work fraught with lyrical self-doubt and disenchantment. While songs like “The Shape I’m In” and the title track would propel the album to #5 on the charts, it would be years before the initial mixed critical response would turn uniformly positive and Stage Fright would be considered a bona fide classic of roots-rock.

Touring in support of Stage Fright, the Band made a stop in the ‘Steel City,’ Pittsburgh PA, performing at the Syria Mosque. A legendary venue built by the Shriners in 1911 and opened in 1916, the Syria Mosque had a lengthy history of hosting incredible musical performances long before the Band showed up at their door, with artists as diverse as Enrico Caruso, Duke Ellington, Miles Davis, Buddy Holly, Sam Cooke, Bo Diddley, the Who, and the Band’s old cohort, Bob Dylan among the many performers that had graced Syria Mosque before 1970. The Band’s November 1st performance was, according to the liner notes of this Zip City CD release, syndicated to FM stations across the country for broadcast. While I couldn’t confirm this as true, I did find that a Dutch TV station taped the concert for later airing, and it was a mono line feed from that recording that was used for several previous bootleg releases of the show.

In 2013, a fly-by-night operation in Japan by the name of Hook & Jab Productions released a bootleg CD titled Syria Mosque 1970 with restored sound and a track listing identical to this Zip City CD, so I’m guessing that they used that Japanese release as an origin for this one, which would explain the odd audio of the performances. The CD’s sound isn’t bad, just a bit muted and hollow which, given its vintage and alleged provenance, isn’t too shabby at all. The Band’s performance is top notch, however, as they crank through a dozen and a half songs drawn from all three of their albums at the time (with an emphasis on songs from Stage Fright, natch). The highlights are what you would expect – “This Wheel’s On Fire,” “The Weight,” “Up On Cripple Creek,” “Stage Fright,” and “The Night They Drove Old Dixie Down” – but a rowdy cover of Little Richard’s “Slippin’ and Slidin’” tops off the concert nicely. The Rev’s recommendation: buy it! 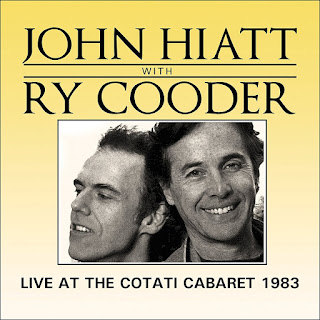 John Hiatt with Ry Cooder – Live at the Cotati Cabaret 1983 (Gold Fish Records)
The early ‘80s were an odd and trying time for talented singer/songwriter John Hiatt. By the time of the 1983 release of his Riding With the King album, Hiatt had already released five commercially unsuccessful albums for three different record labels. His albums were critically-acclaimed and Hiatt songs were recorded and/or performed by folks like Roseanne Cash, Willie Nelson, Bruce Springsteen, Ricky Nelson, and Bob Dylan. Still, Hiatt couldn’t buy a bullet on the charts. Guitarist Ry Cooder, on the other hand, was riding fairly high at the time. A veteran of the Rising Sons (with the great Taj Mahal) and Captain Beefheart and His Magic Band, Cooder was an in-demand studio musician whose credits included recordings by the Rolling Stones, Randy Newman, Van Morrison, and Little Feat, among many others.

Cooder’s solo albums sold reasonably well throughout the 1970s and, by the early ‘80s, he’d made the transition towards into writing movie scores which, with his instrumental talents, he excelled at, resulting in acclaimed soundtracks for films like Walter Hill’s The Long Riders (1980) and Southern Comfort (1981) and Tony Richardson’s 1982 film The Border. Cooder and Hiatt had become friends when Hiatt contributed a pair of songs for Cooder’s 1980 solo album Borderline. Hiatt and his road band at the time backed Cooder on his 1980 Borderline American tour, a favor later returned by Cooder, who played with Hiatt during his 1983 tour for Riding With the King. Cooder would remain with Hiatt for the recording of the singer’s breakthrough album, 1987’s Bring the Family and, in 1991, they formed the band Little Village with Hiatt’s friends and bandmates Nick Lowe and Jim Keltner, the musical collaboration resulting in a lone self-titled album in 1992.

All of which, in a roundabout way, brings us to Live at the Cotati Cabaret 1983, an FM radio broadcast featuring Hiatt and Cooder performing together in Cotati, a rural California town north of San Francisco. Touring in support of Riding With the King, the concert’s setlist draws heavily from that album, Hiatt performing nine of the LP’s dozen songs on this sixteen-track collection, alongside a smattering of material from his earlier efforts. The sound quality ranges from good to better, with a couple of drop-outs and some recording artifacts, but nothing that detracts from the performance. Hiatt’s band included players from his 1982 album All of A Sudden, including keyboardist Jesse Harms and drummer Darrell Verdusco, as well as former Tom Petty & the Heartbreakers’ bassist Howie Epstein and, of course, guitarist Cooder.

Little of this material is familiar to any but the most hardcore Hiatt fanatics, but there’s a lot to like from the underachieving Riding With the King. “Love Like Blood” showcases the warm, soulful vocals that Hiatt would perfect on later albums, his voice complimented by Cooder’s wiry fretwork. “Riding With the King” itself is an underrated tune (that would later become a hit for Eric Clapton and B.B. King), the song brimming with swaggering, confident vocals, resonant guitar licks, and energetic keyboard flourishes while “Say It With Flowers” is a new wave-styled power pop jaunt with vibrant guitar playing and an infectious rhythm punctuated by warbling synthesizer notes.

“Zero House,” which would later be recorded for Hiatt’s 1985 album Warming Up To the Ice Age, is an unabashed rocker that offers some mighty fine Cooder slide guitar and Hiatt’s rapid-fire vox roaring above a locomotive rhythm. Altogether, Live at the Cotati Cabaret 1983 is a solid showcase for both Hiatt’s intelligent lyricism and expressive vocals and Cooder’s imaginative and lively fretwork. The performance captures Hiatt “before the fame,” and it’s well worth checking out for any fan of the man. The Rev’s recommendation: buy it! 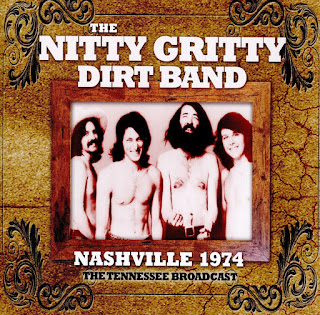 The Nitty Gritty Dirt Band – Nashville 1974 (All Access)
This is a concert that the Rev sort of remembers from high school. Broadcast by local FM radio powerhouse WKDA (before its name change to WKDF), it featured the Nitty Gritty Dirt Band performing live at Woodland Studios in Nashville. The band’s inspired mix of country, rock, and bluegrass music was an unlikely fit with the station’s regular hard rock playlist, but the Nitty Gritty boys had a firm local connection, and they were plugging away in an artistic milieu that included the Eagles, Poco, and the Flying Burrito Brothers, appealing to open-minded record buyers before commercial radio formats placed genre cross-overs into a one-size-fits-all straitjacket.

With their mix of twangy originals – typically penned by singer and guitarist Jeff Hanna and/or multi-instrumentalist John McEuen – and well-chosen cover tunes that ran the gamut from early rock ‘n’ roll classics to country legends like Hank Williams and Bill Monroe, the Nitty Gritty Dirt Band were uncredited, albeit bona fide Americana pioneers. The Dirt Band was still touring in support of their 1972 Will the Circle Be Unbroken album at the time of this live broadcast, the enormous triple-vinyl release representing a commercial breakthrough for the band and featuring a slew of impressive guest stars like “Mother” Maybelle Carter, Doc Watson, Earl Scruggs, Merle Travis, and Norman Blake. The LP would hit #4 on the country charts and a respectable #68 on the pop charts, opening up an entirely new audience for the band as the album eventually went Platinum™. They would later revisit the entire Will the Circle Be Unbroken concept with two additional volumes in 1989 and 2002.

The Nitty Gritty Dirt Band was down to four members in January ’74 when they performed for the radio audience at Woodland Studios, with Hanna and McEuen joined by drummer Jimmie Fadden and guitarist/keyboardist Jimmy Ibbotson. Some of the material from this show would be included on the band’s Stars and Stripes Forever album, released later that year, but I’m not sure why they didn’t just release the entire concert on vinyl. The performance documented by Nashville 1974 offers an engaging mix of country, rock, and bluegrass, the band’s signature sound accompanied by an obvious enthusiasm and reverence for the material.

They deliver passionate performances of tunes like Buddy Holly’s “Rave On,” Hank Williams’ “Jambalaya (On the Bayou),” Johnny Horton’s “The Battle of New Orleans,” and Bill Monroe’s “Uncle Pen,” but they aren’t afraid to dig into more obscure songbooks, as with their fine reading of Michael Nesmith’s “Some of Shelley’s Blues” or Michael Martin Murphy’s “Cosmic Cowboy.” Of course they included their two biggest hits at the time – loving covers of Kenny Loggin’s “House At Pooh Corner” and Jerry Jeff Walker’s “Mr. Bojangles” – before closing out the show with the Cajun romp ‘n’ stomper “Diggy Liggy Lo.”

The band would continue to struggle through the rest of the ‘70s, scoring the occasional hit single but virtually spending nearly two decades in the wilderness before dropping the “Nitty Gritty” from their name and finding their footing as an exclusively country-leaning, hit-making machine. They’d score better than a dozen Top Ten charting country hits during the mid-to-late ‘80s before re-adopting their former name and soldiering on well into the new millennium. For this night in Nashville, the band let its talents shine brightly, performing with joyous abandon. The Rev’s recommendation: buy it!