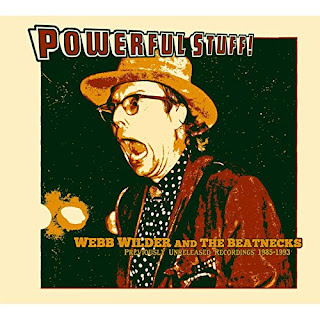 Americana legend and Nashville’s favorite son Webb Wilder has been making great music for better than 30 years with a dozen studio and live albums to his credit. With his band of various ne’er-do-wells the Beatnecks, Wilder has cranked out a heady, unique blend of roots-rock, rockabilly, blues, and country music that owes as much to the British Invasion as it does the Delta blues. It’s a sound that could only be pulled off by the big man from Mississippi.

Wilder’s last album was 2015’s critically-acclaimed Mississippi Mōderne, of which the Reverend wrote “in the hands of a lesser artist, this ramshackle mix of garage-rock, blues, and old-school country music would sink like an over-inflated soufflé, and the album’s often over-the-top lyrics would lack in sincerity coming from a singer without Wilder’s charismatic personality. Backed by the grizzled veterans that comprise the Beatnecks, though, Wilder delivers a powerful and entertaining collection…” Mississippi Mōderne was Wilder’s first studio effort in six years and only his second since 2005’s excellent About Time, so none of us thought that we’d hear from him again anytime soon.

If you’re in the Music City at the end of the month, Webb Wilder and the Beatnecks will perform at the official CD release party for Powerful Stuff! on Sunday, April 29th at Nashville’s Exit/In, a venue where several of the tracks on the new CD were originally recorded live in 1986. The current Beatnecks lineup includes Webb Wilder, drummer Jimmy Lester, bassist Tom Comet, and guitarist Bob Williams. Check out the album’s tracklist below and then order your copy from Amazon.com!

Buy the CD from Amazon.com: Webb Wilder and the Beatnecks’ Powerful Stuff!
Posted by Rev. Keith A. Gordon at Sunday, April 01, 2018