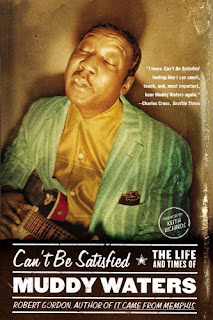 There are precious few cultural icons as important as McKinley Morganfield, better known to most people as Muddy Waters. A Mississippi Delta sharecropper working on the Stovall Plantation, the thirty-year-old Morganfield would travel to Chicago in 1943 to eventually become the musical link between Delta bluesmen like Charlie Patton, Robert Johnson, and Son House and early rockers like the Rolling Stones and the Yardbirds.

During the next forty years, Waters would find fame as a bandleader, singer and guitarist, influencing a generation of blues and rock musicians while scrabbling for every hard dollar. Robert Gordon, music journalist and author of the acclaimed It Came From Memphis, has written the definitive biography of the blues legend, Can’t Be Satisfied.


Can’t Be Satisfied is based on interviews conducted by Gordon with family and former Waters band members and on four decades of published material, from obscure manuscripts in university libraries to books, newspapers and magazines and, of course, the music of Muddy Waters itself. The resulting book is, perhaps, the most comprehensive music biography outside of Peter Guralnick’s excellent books on Elvis Presley. Gordon finds Waters in the Mississippi cotton fields of his youth, recounting his formative years and early field recordings with Library of Congress historian Alan Lomax and Fisk University professor John Work. We travel along with Waters when he first arrives in Chicago, already a booming blues town during the unpredictable World War II years. Waters’ relationship with famed label magnate Leonard Chess is covered in detail, as are the studio sessions for Chess Records and the Aristocrat label that resulted in a number of late ’40s and early ’50s R&B chart hits for Waters.

After Water’s popularity waned with African-American record buyers more interested in soul records than in Delta-dirtied blues, Gordon takes us on the road to England and across the United States with Waters and his touring band. Throughout the 1960s and ‘70s, Waters played to a younger white, middle class audience, influencing rockers like the Rolling Stones, who took their name from a Waters’ song. Gordon recounts the early ‘60s folk era when Waters and contemporaries like Mississippi John Hurt were recast as “folk blues” artists. Can’t Be Satisfied winds down with Waters’ late ‘70s studio work with Johnny Winter and death in 1983 from cancer.

Gordon writes in a fluid style, his enthusiasm sometimes getting the best of him when describing a
certain song or performance. Brought up on the blues in Memphis, Gordon has an ear for the music and brings a great deal of passion and empathy to his treatment of Waters. He offers up the blues giant with warts intact, covering Waters’ frequent autocratic manner as bandleader, his considerable womanizing that would lead to numerous children, and his infrequent mean streak that would cause band members to quit.

Gordon also does an admirable job in relating Waters’ generosity, his love of family, and his sense of responsibility for his many children and his creativity, which was never more than a few steps away from the Delta. More importantly, Gordon tells the story of the blues, the music’s roots and its importance and explains its influence on music today. The book’s appendixes offer up a suggested discography and other historical minutiae while Gordon’s exhaustive notes bring Waters’ life into finer detail.


Muddy Waters is an important figure in American music, not only for his own recordings, which would be enough to ensure his legacy, but also for the many talented musicians Waters brought into his band and launched into the spotlight. Little Walter, Otis Spann, Jimmy Reed and James Cotton all got their start in Waters’ bands, each contributing to Waters’ reputation even while creating musical history with their own work. Muddy Waters helped define the Chicago blues sound, putting the wheels in motion for much of what would follow in the music world, from blues and jazz to R&B and rock ‘n’ roll. Waters’ story is a phenomenal tale, expertly told by Robert Gordon in Can’t Be Satisfied, an excellent book that should not be overlooked by anyone with more than a passing interest in blues or rock music. (Back Bay Books, published 2003)

Buy the book from Amazon.com: Robert Gordon’s Can't Be Satisfied
Posted by Rev. Keith A. Gordon at Sunday, April 08, 2018