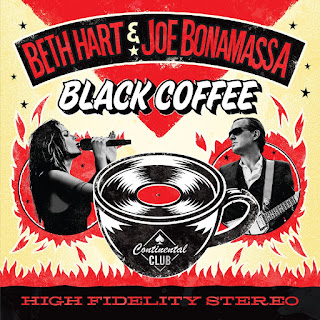 Black Coffee is the third studio album recorded by Hart and Bonamassa, and the pair’s first work together in five years, during which time Hart released a pair of well-received solo albums in 2015’s Better Than Home and the following year’s Fire On the Floor while Bonamassa released something like a zillion live and studio LPs. With producer Kevin “Caveman” Shirley back on the boards for round three, and much like their first two albums, Black Coffee is a collection of well-chosen cover tunes that run the gamut from pure blues to R&B and even Americana. With Joey B. holding down the six-string chores, the pair is backed by Bonamassa’s talented, road-tested touring band of veteran musicians.


Hart and Bonamassa dug deep into the annals of rock ‘n’ blues for Black Coffee, kicking the album off with “Give It Everything You Got,” a minor 1971 FM radio hit for Edgar Winter’s White Trash. Hart’s voice is more soulful than White Trash vocalist Jerry Lacroix, if not quite as funky, but a full-blown, gale-force horn section provides the groove atop of which Bonamassa embroiders his molten fretwork while Hart punches out the lyrics like a champion prizefighter. The title track is an obscure Ike & Tina Turner deep cut from a 1972 album, but a rocker like Bonamassa would be more familiar with the Humble Pie version from their 1973 album Eat It. The Hart/Bonamassa version treads much closer to Steve Marriott’s reading of the song, from the sludgy, bass-heavy instrumentation and shimmering guitar to Hart’s gritty, whiskey-soaked vox.

Not everything on Black Coffee works, or even rocks – a cover of the 1960 Teri Thornton jazz classic “Lullaby of the Leaves” allows Hart to indulge in her torch singer persona, which displays a lot of emotion but seldom moves the meter for me, even with Bonamassa’s nuanced and melodious guitar solos. In a similar vein, but much tastier, is a cover of “Kansas Joe” McCoy’s 1936 blues/jazz standard “Why Don’t You Do Right.” Originally recorded by the Harlem Hamfats as “The Weed Smoker’s Dream,” Hamfats member McCoy later rewrote the song, which later became a 1941 hit for Lil Green, with Big Bill Broonzy on guitar, and an even bigger hit a year later for Peggy Lee and Bennie Goodman. In Hart’s hands, the jazzy big band arrangement offers her blustery, albeit playful vocals and stunning guitar playing as an integral part of the song’s lush instrumentation.

Hart and Bonamassa blow up Howlin’ Wolf’s “Sitting On Top of the World” with brassy hornplay, scorching guitar licks, and Reese Wynans’ honky-tonk keyboards. There’s no way that Hart could blow gruffer and grittier than the legendary Wolf; instead she brings a subtle but strong soulfulness to the lyrics rather than duel with history. Their cover of Lucinda Williams’ “Joy” takes the Americana legend’s original, pumps up the volume and paints it blue with slithery guitarplay, vocal gymnastics, and a menacing rhythmic soundtrack. Their version has taken some heat from Williams’ hardcore fans for its funky reconstruction, but Hart and Bonamassa bring a punkish blues vibe to the song while still capturing the heartbeat of the original. The LaVern Baker 1953 single “Soul On Fire” is the sort of emotionally-singed R&B that Hart cut her teeth on, and her rendition here is simply priceless, the singer paying tribute to Baker’s original while exorcising a few demons of her own with the performance.


In its heart (no pun intended), Black Coffee is retro as hell…Hart and Bonamassa wear their love of these songs and the artists that originally sang them on their sleeves, which isn’t necessarily a bad thing. They imbue their performances with enough old-school tradition to honor the O.G. recordings, but bring an energy, musical chemistry, and contemporary edge that helps pull the songs into the second decade of the 21st century.

Hart is at her very best when she’s paired with Bonamassa, belting out these tunes like she’s singing for her supper, and he gladly relinquishes the glare of the spotlight for a while, content to channel his restless creative muse through his fingertips. Black Coffee is the pair’s most accomplished effort yet, a too-quick romp through the great American rock ‘n’ soul songbook by a pair of talented artists that have found magic in the music. Grade: A (J&R Adventures, released January 26, 2018)