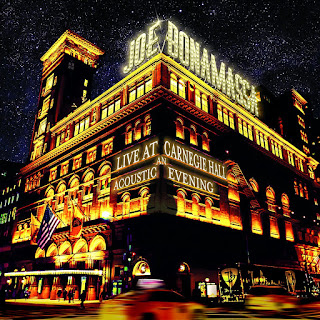 For no good reason, a lot of people just don’t like Joe Bonamassa; for many good reasons, there are more people that do like the popular blues-rock guitarist. Haters gonna hate, I suppose, ‘cause there’s really quite a lot about Bonamassa’s career to admire. Young Joey B. was mentored by the late, great Danny Gatton and opened for the legendary B.B. King when he was only 13 years old. After a short-lived mid-‘90s stint with the blues-rock ‘supergroup’ Bloodline with the sons of Miles Davis, Berry Oakley (Allman Brothers Band), and Robby Krieger (The Doors), Bonamassa launched his career as a solo artist with the underrated major label album A New Day Yesterday in 2000.

In the seventeen years since, Bonamassa has established an extremely successful cottage industry that includes his own independent record label (J&R Adventures), which has released roughly three-dozen Bonamassa live and studio albums and concert videos as well as collaborations with singer Beth Hart and L.A. friends Rock Candy Funk Party. He’s part of the classic rock supergroup Black Country Communion with Glenn Hughes, Derek Sherinian, and Jason Bonham, and he’s played on stage with giants like Eric Clapton, Buddy Guy, and Warren Haynes, among others – none of which are likely to share the spotlight with just any old scrub. Bonamassa has lent his talents to recordings by a dozen or more artists, and he founded the Keeping the Blues Alive Foundation to fund scholarships and music education resources to young musicians-to-be.


Yeah, Bonamassa is merchandised to the hilt, and any old cheesy product you can dream up, you can probably buy it with JB’s logo or cartoon visage inked on the surface somewhere. But Joey B. also delivers value for his fans’ money with deluxe album and video packages, and he and his long-time manager Roy Weisman (along with producer Kevin Shirley, the third part of this mega-million trio) don’t skimp on filming concerts for video release, ponying up the bucks to provide the best multi-camera product possible. I suspect that it’s his ubiquitous success that has so many people denying Bonamassa the respect he so richly deserves, success that he’s earned onstage a couple hundred nights a year for a couple of decades now.

Bonamassa is neither a great singer nor songwriter, though he’s taken huge steps in improving his skills in both areas and, truthfully, he’s better at both than many of his contemporaries. He’s a traditionally-styled blues guitarist with great chops who typically stays in the groove but every now and then takes an inspired, imaginative flight of instrumental fancy. More to the point, Bonamassa is an adventurer, a capital ‘A’ Artist who continues to grow, evolve, and challenge himself in ways that few blues or rock musicians attempt these days. Case in point, Bonamassa’s recently-released Live At Carnegie Hall: An Acoustic Evening set, two discs capturing a sublime performance at yet another historic venue that JB can cross off his bucket list (along with Royal Albert Hall, the Beacon Theatre, Radio City Music Hall, and the Vienna Opera House).

Driving Towards the Daylight


It’s not the first time that the guitarist has waxed acoustic (there are at least a half-dozen other albums in Bonamassa’s rapidly-growing catalog that have been created sans electricity), nor is it the first time he’s taken to a legendary stage. It’s his efforts to re-contextualize his songs, to place them in a different light that is so admirable from an artistic perspective. More than merely performing his trademark electric blues with a beat-up old Martin guitar, Bonamassa re-imagines the material, sometimes in vastly different ways. To join him on the Carnegie Hall stage, the guitarist enlisted a multi-racial, multi-ethnic group of talented musicians like cellist Tina Guo (China), percussionist Hossam Ramzy (Egypt), and singers Gary Pinto, Juanita Tippins, and Mahalia Barnes (Australia) alongside longtime musical foils like pianist Reese Wynans and drummer Anton Fig along with multi-instrumentalist Eric Bazilian (The Hooters).

Although Bonamassa is center-stage here, he frequently shares the spotlight in service of the performance, especially with Bazilian’s nimble mandolin and Guo, who often looks like a woman possessed with her furious style of play. By fleshing out his original songs with unusual acoustic instrumentation alongside his nuanced fretwork, Bonamassa alchemically transforms songs like “This Train” – from his 2015 album Blues of Desperation – into entirely new works. With Wynans’ piano intro nicking a few licks from an old Jethro Tull song, “This Train” crystalizes into a country-flavored rustic rave-up with Guo’s cello sounding like a fiddle, Wynans’ honky-tonk piano-pounding accompanied by a choogling rhythm on top of which Bonamassa adds a bit of chicken pickin’ and the background singers sound like a church choir.

How Can A Poor Man Stand Such Times and Live?


The magic is everywhere in these grooves – “Black Lung Heartache,” a bluesy dirge from 2011’s Dust Bowl album – is reimagined as a fierce, Delta blues death letter with exotic instrumental flourishes. “Driving Towards the Daylight,” from his 2012 album of the same name, is made even more wistful courtesy of Guo’s mournful cello and Bonamassa’s anguished vocal performance while “Mountain Time,” from way back on JB’s 2001 sophomore album So, It’s Like That, is afforded a lush, beautiful performance that showcases the various instrumentalists’ immense talents. There are only three cover tunes among the fifteen tracks on Live At Carnegie Hall, among them the Depression-era country ramble “How Can A Poor Man Stand Such Times And Live?,” which offers a blues vibe but is delivered with gospel fervor, bolstered by soaring solos from Mahalia Barnes, Juanita Tippins, and Gary Pinto, three very fine vocalists, indeed.

The Black Country Communion tune “Song of Yesterday,” off the band’s 2010 self-titled debut, is shed of its classic rock bombast but made all the more powerful by the song’s sparse arrangement, which increases the ambient claustrophobia and allows the backing harmonies to shine above Guo’s melancholy cello and Bonamassa’s darkly elegant fretwork. A cover of the late Leon Russell’s classic “Hummingbird” benefits from Wynans’ skilled piano-play and while Bonamassa’s vox will never be mistaken for Russell’s soulful grittiness, he acquits himself well, providing an emotional foundation for the instrumentalists to build on. Better yet is the album-closing cover of Bette Midler’s hit “The Rose,” which provides a showcase for Bonamassa’s underrated vocals alongside Wynans’ lovely piano accompaniment with crescendos of gorgeous instrumentation and Barnes’ soul-drenched backing vocals.


Joe Bonamassa has built a large (and still-growing) worldwide audience precisely because of artistic gambles like Live At Carnegie Hall: An Acoustic Evening. It takes an artist willing to subsume their ego and share the spotlight with equally-talented instrumentalists to make great music, and in an effort to satisfy his wandering muse, Bonamassa is willing to risk alienating his fans to continue challenging himself by exploring different facets of his art. That so many people come along for the ride is a testament not only to Bonamassa’s skills but also to the honesty and reverence with which his music is imbued.

Inspired by guitarists like Eric Clapton and Rory Gallagher, Joey B. never strays far from the blues-rock sounds he grew up with. But with each new album and every fresh challenge he submits himself to; Joe Bonamassa not only expands his own musical palette but also quietly broadens the definition of blues music unlike all but a handful of his contemporaries. Love him or hate him, Joey B. is the stone cold real deal. Grade: A+ (J&R Adventures, released June 23, 2017)