Grapefruit Records’ Looking At the Pictures In the Sky celebrates 1968! 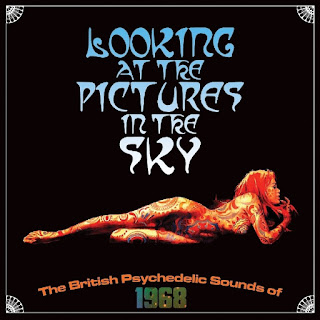 Everybody is just so jazzed up because this year is the 50th anniversary of 1967, the vaunted “summer of love.” Well, kiddies, the year is officially 75% over and done with and while that still leaves roughly three months to celebrate the hedonistic excesses of ’67, a new year is right around the corner. The good folks at U.K. archival specialists Grapefruit Records must agree, ‘cause they already have their eyes on the semicentennial of 1968...

On September 29th, 2017 here in the USA, Grapefruit will release Looking At the Pictures In the Sky, a three-disc anthology of British psychedelic rock that features 77 tracks and rocks an almost four-hour running time. The set is packaged in a cool clambox and includes a 44-page booklet brimming over with biographical information and rare photographs of the artists featured. Best of all, the set is budget-priced – selling on Amazon.com for $19.99 as of this writing – a bargain considering the tonnage of music included.

And just what, exactly, will you hear on Looking At the Pictures In the Sky? Well, among the 77 tracks here, you’ll find a number of the ‘usual suspects’ like the Move (“Omnibus”), the Crazy World of Arthur Brown (“Spontaneous Apple Creation”), the Pretty Things (“Talking About the Good Times”), and Procol Harum (“In the Wee Small Hours of Sixpence”) offering lesser-known, lysergic-drenched tunes released in 1968.

The set also includes songs from a number of cult bands whose early singles demand platinum-prices from collectors, bands like the Fire (“Father’s Name Is Dad”), Tuesday’s Children (“She”), the Spectrum (“Music Soothes the Savage Breast”), the Alan Bown (“For Your Thoughts”), Andy Ellison (“Cornflake Zoo”), Blonde On Blonde (“Country Life”), and Skip Bifferty (“Round and Round”). 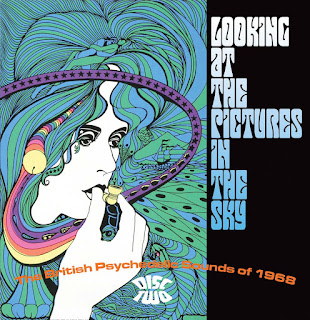 Grapefruit Records has also dug up some truly hard-to-find, bona fide psych-rock classics for Looking At the Pictures In the Sky, rare 45s by bands like Fleur de Lys, the Barrier, the Factory, the Glass Menagerie, Rupert’s People, and Mike Stuart Span that are virtually unknown outside of the rabid psych collectors’ community. Throw in a handful of singles by unlikely candidates like the Spencer Davis Group (“Time Seller”), Status Quo (“Technicolor Dreams”), Graham Gouldman (“Upstairs Downstairs”), and the Marmalade (“Mr. Lion”) as well as the rarity “Aeroplane,” the flip-side of the debut single by Jethro Tull (credited incorrectly to ‘Jethro Toe’) and what you have is a mind-blowing collection of cult classics, obscure B-sides, and unreleased treasures of British psychedelia circa ’68!

Looking At the Pictures In the Sky is a sequel, of sorts, to Grapefruit’s critically-acclaimed 2016 box set I’m A Freak, Baby: A Journey Through the British Heavy Psych and Hard Rock Underground Scene 1968-72 (check out the Rev’s review). The label’s efforts in preserving this creative era of rock ‘n’ roll history is a godsend for those of us who can’t spend $1,000 on a rare single. Check out the full tracklist of Looking At the Pictures In the Sky on the Grapefruit Records website and use the link below to order your copy from Amazon.com…your ears will thank me later.

Buy the box set from Amazon.com: Various Artists - Looking At the Pictures In the Sky
Posted by Rev. Keith A. Gordon at Monday, September 11, 2017