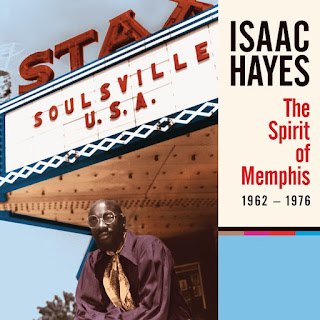 Here’s a ‘gimme’ for your Christmas list…on September 22nd, 2017 Craft Recordings will release The Spirit of Memphis (1962-1976), a four-disc, career-spanning retrospective of the great Isaac Hayes’ storied career. The set is packaged inside a 60-page hardcover book that includes a slew of rare photos and memorabilia, as well as an essay by one of my favorite music historians, Robert Gordon (no relation) that includes an interview with Stax Records founder Jim Stewart and contributions from Floyd Newman (member of original Stax session band the Mar-Keys) and Sam Moore (one half of soul legends Sam & Dave), among others. The set also includes a replica 7” vinyl single of “Laura, We're On Our Last Go-Round,” Hayes first commercially-released recording.

Hayes’ story is that of the American dream. Born in rural Covington, Tennessee near Memphis Hayes was the child of sharecroppers and he grew up working in the fields. He began singing in his local church at the age of five and would later teach himself to play piano and organ, flute, and saxophone. Hayes began his career by playing clubs and juke-joints at night while he worked at a meat-packing plant in Memphis by day. Hayes began his recording career as a session player for Stax Records, later hooking up with songwriting partner David Porter to write hit songs for artists like Johnnie Taylor, Carla Thomas and, most notably, Sam & Dave. Hayes and Porter also produced several Stax artists, the pair helping to define the “Memphis soul” sound.

Hayes released his debut album, Presenting Isaac Hayes, in 1968; when the jazz-flecked improvisational collection failed to chart, he radically changed musical directions, re-writing the book of soul in the process. Working with producer Marvell Thomas (brother of Carla, son of Memphis music legend Rufus Thomas) and backed by the Bar-Kays (guitarist Michael Toles, bassist James Alexander, and drummer Willie Hall), Hayes recorded one of the most influential albums of all time with 1969’s Hot Buttered Soul.

Featuring just four extended songs (two per side), including a twelve-minute cover of the Bacharach/David tune “Walk On By” and an eighteen-minute cover of Jimmy Webb’s “By the Time I Get To Phoenix,” Hot Buttered Soul broke all the rules for “radio-friendly” content while still peaking at #8 on the pop charts (#1 R&B), Hayes contributing to the ushering in of AOR FM radio. Several hit albums would follow, including the equally-innovative and influential Top Ten 1971 release Black Moses and that year’s chart-topping soundtrack to the hit movie Shaft.


Each disc of Hayes’ The Spirit of Memphis (1962-1976) documents a different facet of the artist’s lengthy career. The first disc documents his early work as a songwriter and producer for Stax, including songs by Carla Thomas, Johnnie Taylor, Mabel John, and even country legend Charlie Rich. The second disc showcases Hayes’ work as a solo artist with singles recorded for Stax subsidiaries Volt and Enterprise Records, including an early single as “Sir Isaac and the Do-Dads (“Blue Groove” b/w “The Big Dipper”). Disc two includes such Hayes’ classics as “By the Time I Get To Phoenix,” “The Look of Love,” “Never Can Say Goodbye,” and the smash hit “Theme From Shaft” (so ubiquitous in the early ‘70s that my high school had a “Shaft Gang”).


Disc three of The Spirit of Memphis (1962-1976) offers examples of Hayes’ uncanny ability to cover a song and make it entirely his own, including “Walk On By,” “I Just Don’t Know What To Do With Myself,” and “Never Gonna Give You Up.” The third disc also includes six live tracks recorded at the Operation PUSH Black Expo in November 1972, half of which have never been previously released, including Hayes’ takes on “The Ten Commandments of Love” and “Stormy Monday.”

The fourth and final disc in the set is titled “Jam Master,” the disc featuring Hayes jamming in the studio on seven songs, five previously-unreleased including covers of Bill Withers’ “Ain’t No Sunshine,” the Shaft soundtrack outtake “Black Militant’s Place,” and a 33-minute psychedelic jam on “Do Your Thing” with the Bar-Kays. The Spirit of Memphis (1962-1976) is being released as part of Stax Records’ 60th anniversary celebration, the set the effort of a year’s work and coming hot-on-the-heels of the recent digital release of Hayes’ Enterprise albums, which were re-mastered from the original analog tapes by engineer Dave Cooley at Elysian Masters. Vinyl reissues cut from these new masters – including Hot Buttered Soul and Black Moses – will be released later this year.

There can be no debating that Isaac Hayes was one of the most influential and innovative artists in the history of soul music. Hayes’ songs have been sampled over 1,000 times by hip hop artists like 2Pac, Kanye West, Jay Z, and the Wu Tang Clan as well as by rockers like Portishead and Massive Attack. Hayes influence reached beyond the R&B chart to impact artists as diverse as Prince and Henry Rollins of Black Flag, among others. The Spirit of Memphis (1962-1976) is a landmark collection of great music created by a legendary artist.

Buy the set from Amazon.com: Isaac Hayes’ The Spirit of Memphis 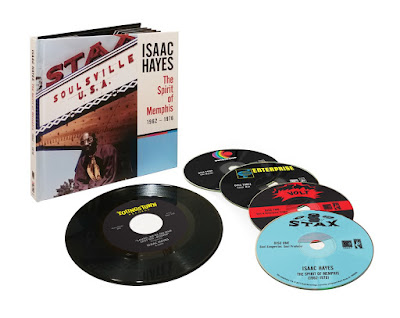