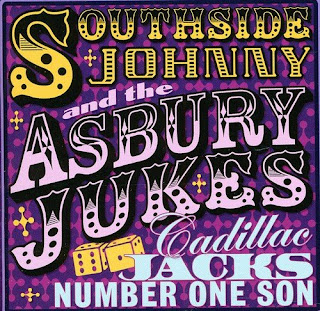 Best-known as a longtime buddy of both Bruce Springsteen and Little Steven Van Zandt, “Southside” Johnny Lyon and the Asbury Jukes enjoyed a couple of minor hits in the late 1970s and early ‘80s before sinking below the pop culture radar. It hasn’t stopped the crew from cranking out new music, however, and save for a few years during the 1990s sitting on the sidelines in Nashville (recharging his batteries), Southside and his gang of rhythm and blues true believers have continued to deliver Memphis soul, Chicago blues, and old-school rock ‘n’ roll with the fervor of a traveling R&B revue, the band just as likely to kick up some dust with a vintage Willie Dixon number as they are to belt out a custom-fit Springsteen song.

Exhibit A for the defense is this nifty lil’ two-disc import set Cadillac Jacks Number One Son, brought to our attention by our friends at Secret Records in the U.K. and containing a red-hot 22-song performance from a sold-out November 2002 show at The Opera House in Newcastle upon Tyne in jolly ole England. Originally released on DVD back in the early-oughts, as well as on CD as From Southside to Tyneside four years ago, its subsequent re-birth on compact disc is a boon for we original Jukes fanatics, and if you’ve ever loved Southside Johnny’s soulful howl of a voice, you’re going to want to beg, borrow, or steal a copy of Cadillac Jacks Number One Son for yourself. It has just about everything you could ask for from Southside Johnny and the Asbury Jukes on a live disc, an exciting mix of old and new, rhythm and blues, and all the blue-eyed soul your hungry ears can handle.


Cadillac Jacks Number One Son finds the band performing with a renewed vigor thanks to the addition of longtime Jersey cohort Bobby Bandiera on guitar and keyboardist Jeff Kazee. The set includes a handful of tunes from the band’s then-current release, 2000’s Messin’ With The Blues, Lyon’s furthest sojourn onto blues turf on record, and songs like the horn-driven big-band rave-up “Baby Don’t Lie” or the Albert King doppelganger “Living With The Blues” (which offers up some incredible Southside vox and meaty Bandiera solos reminiscent of you-know-who) are barely-controlled wildfires. A cover of Tom Waits’ “Gin Soaked Boy” is cranked-up-and-tight like a Little Walter joint, with greasy git licks from Bobby B and flaming harp tones from Lyon’s capable hands.

The performance doesn’t eschew the old crowd favorites though, and several of the best and brightest from the Jukes’ 1970s-era releases shine famously in this new light. The Little Steven-penned “This Time Baby’s Gone For Good” (from 1978’s Hearts of Stone) is a lush heartbreaker worthy of Otis Redding while the bittersweet “Some Things Just Don’t Change” (from 1977’s This Time It’s For Real) is simply, eternally divine. Southside has probably performed the title track to his 1976 debut, “I Don’t Want To Go Home,” literally thousands of times, but he refuses to phone it in, imbuing the song with the same lonesome heartache that he did some 25 years earlier, while the romance-gone-bad finality of “Hearts of Stone” will induce tears from all but the most emotionally-choked listener. Van Zandt’s blissfully wonderful “All I Needed Was You” (from 1991’s comeback LP Better Days) is reminiscent of everything you ever loved about 1950s-and-60s-era rock ‘n’ soul music, while the band’s lively cover of the Willie Dixon-penned, Sonny Boy Williamson gem “Help Me” is a slice of blues heaven.


Altogether, getting a promotional copy of Cadillac Jacks Number One Son in my mailbox was like getting an early Christmas present...it’s just that damn good! If you love rhythm and blues and want to hear it from one of the funkiest, tightest, blue-eyed soul bands that’s ever been, you owe it to yourself to track down Southside Johnny & the Asbury Jukes’ overlooked but perfectly-cooked Cadillac Jacks Number One Son and have your bad self a house party! Grade: A (Secret Records U.K., released September 13, 2012)

Also on That Devil Music: Southside Johnny and the Asbury Jukes’ The Fever CD review