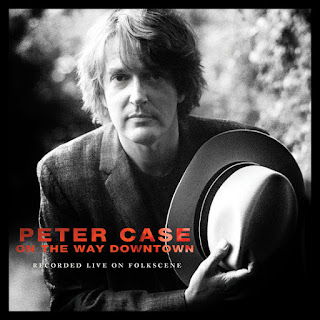 It should come as no surprise that we’re rather fond of singer/songwriter Peter Case ‘round the That Devil Music.com world HQ. The artist’s storied career has taken him from punk pioneers the Nerves to power-pop trailblazers the Plimsouls to a solo career featuring Case’s whip-smart songwriting and folk-rock sound that earned the artist a Grammy® nomination for his self-titled 1986 solo debut album.

As such, we’re always happy to hear of some new music from Case even if, in this case, it’s old music in a form that we haven’t yet heard. On October 27th, 2017 Omnivore Recordings will release Case’s On the Way Downtown: Recorded Live on FolkScene, the album featuring previously-unreleased performances from nearly 20 years ago.

Documenting a pair of live radio performances on the popular KPFK-FM syndicated radio program FolkScene, the eighteen-track album features nine songs from Case’s 1998 album Full Service, No Waiting, a full-band performance that includes such great tunes as “Spell of Wheels,” “See Through Eyes,” and “On the Way Downtown.” The second half of the new album features material from Case’s 2000 album Flying Saucer Blues as well as songs from earlier releases, material like “Paradise Etc,” “Walking Home Late,” and “Blue Distance” performed by Case and violinist David Perales. Both acoustic sets have remained unheard since their original radio broadcasts.

In the liner notes to the album, Case recalls “It felt like such an honor to play Howard and Roz Larman’s FolkScene. All the great people were on it, a Who’s Who of folk music. I’d loved the program for years. I listened in every week. Roz spun the coolest records, Howard deftly handled the interviews, and a key member of the team was Peter Cutler, their sound engineer. He tuned in great sound for each session. Live six-piece band with an hour soundcheck? No problem for Cutler.” On the Way Downtown should provide an appropriate companion to Case’s critically-acclaimed 2015 studio album for Omnivore, Hwy 62.

Buy the CD from Amazon.com: Peter Case’s On the Way Downtown