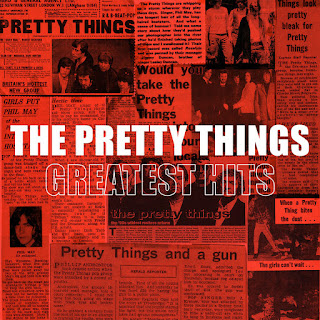 The Pretty Things are undeniably one of the greatest rock ‘n’ roll outfits of the 1960s and ‘70s…though they weren’t always considered so. After scoring hits out of the box with timeless tracks like “Roslyn” and “Don’t Bring Me Down,” the PTs suffered through an extended streak that saw a largely indifferent response from the record-buying public after the mid-‘60s. But as the band evolved beyond its early British R&B roots into a psychedelic and subsequent hard rock sound, the Pretty Things released great albums like S.F. Sorrow (1968), Silk Torpedo (1974), and Savage Eye (1976) before breaking up in the late ‘70s.

The original PTs – singer Phil May and guitarist Dick Taylor – put the band back together in the early ‘80s and have been plugging away in the trenches more or less ever since (with a few hiatuses here and there). The latter-day band has released a few gems as well, including 2007’s Balboa Island and 2015’s critically-acclaimed The Sweet Pretty Things (Are In Bed Now, of Course…). The year 2015 also saw the release of Bouquets From A Cloudy Sky, a career-spanning box set honoring the band that influenced artists as diverse as David Bowie, the Clash, and the Libertines, among many others.

On October 13th, 2017 Madfish Records will release the Pretty Things’ Greatest Hits, a two-disc collection of (their hyperbole, not mine) “25 of the very best tracks from the dirtiest, loudest, most controversial and influential band the world has seen.” The first disc includes the band’s initial 1960s-era U.K. chart hits “Roslyn,” “Don’t Bring Me Down,” “Honey, I Need,” “Cry To Me,” and “Midnight to Six Man” as well as latter tracks like “S.F. Sorrow Is Born,” “Defecting Grey,” and “L.S.D.” It looks like Greatest Hits only covers the period of the band’s first four album releases (1965-1968) and eschews any of their fine ‘70s work (a second volume, maybe?) but it does include a 2016 recording of “Mr. Tambourine Man,” which was originally offered to the band to record but they passed on it.

The Pretty Things’ Greatest Hits also includes a bonus CD of an exclusive recorded performance of the band’s self-titled 1965 album form the legendary 100 Club in London. The album will be available in CD, vinyl, and digital download formats and includes comments on individual tracks from May and Taylor as well as liner notes from longtime band manager Mark St. John.

Buy the CD from Amazon.com: The Pretty Things’ Greatest Hits
Posted by Rev. Keith A. Gordon at Sunday, September 17, 2017