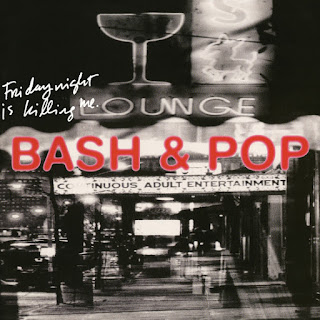 Widely considered one of the greatest outfits in the history of rock ‘n’ roll, the Replacements enjoy a cult following far above and beyond the band’s meager commercial accomplishments. Part of their hallowed status among fans is due to the band’s unpredictable live concerts where the ‘Mats could be the best band in rock on any given night…or possibly the worst. Either way, the band’s ramshackle performances were never dull and were always entertaining. Considering the enduring nature of the band’s classic recordings like Let It Be and Pleased To Meet Me, the Replacements have earned their place on the Mount Olympus of rock ‘n’ roll.

When internal tensions broke up the Replacements in 1991, bassist Tommy Stinson – an integral part of the band’s honest, anarchic sound – wanted to continue playing in a group. Switching to guitar, he convinced Replacements’ drummer Steve Foley to join the new band, along with his brother Kevin Foley on bass, and he brought in guitarist Steve Brantseg to form the outfit known as Bash & Pop. The foursome subsequently recorded Friday Night Is Killing Me with producer Don Smith, the 1993 album including guest appearances by Benmont Tench and Mike Campbell from Tom Petty & the Heartbreakers and Wire Train’s Jeff Trott. The album received modest critical acclaim for its energetic, guitar-driven rock ‘n’ roll but went nowhere fast, and Stinson soon wandered off to eventually join Guns N’ Roses.


Although Friday Night Is Killing Me paled in comparison to the Replacements’ best work, the album has grown in stature in the nearly quarter-century since its release, no mean feat as the CD has been out-of-print for 20 years. Nothing more was heard from Bash & Pop until earlier this year, when Stinson hooked up with friends like Steve Selvidge of the Hold Steady and Luther Dickson of the North Mississippi Allstars to record Anything Could Happen, the first Bash & Pop album since 1993. With renewed interest in the band growing, Omnivore Recordings has reissued Friday Night Is Killing Me as a deluxe two-disc set featuring the original album mastered by current B&P bassist Justin Perkins as well as an eighteen-track bonus disc featuring rare singles, home demos, and B-sides, most of which are previously-unreleased.

The original tracks on Friday Night Is Killing Me offer no-frills, guitar-driven rock ‘n’ roll. Album opener “Never Aim To Please,” for instance, twangs ‘n’ bangs like the Georgia Satellites on dexies, with a BIG drum sound, scorching fretwork, and a melody you could hang your coat on. The mid-tempo “Loose Ends” is similarly rootsy, Stinson’s drawled vocals matched by Steve Foley’s measured timekeeping, a throbbing bass line, and scraps of twinkling guitar. “One More Time” bursts out of the gate like a champion race horse before teetering off the track, Foley’s can-slamming providing the only anchor to the musical chaos.


The punkish fervor of “Fast & Hard” is perhaps the closest that Stinson comes here to replicating the inexplicable chemistry of his former band, the song displaying reckless energy and great musical dynamics while the album’s title track is a grandiloquent almost-ballad with tortured vocals and lush instrumentation. The bonus disc provided with the Friday Night Is Killing Me reissue is a roller-coaster jaunt through the Bash & Pop archives, a mish-mash of demos and rarities that is uneven by nature. The home demo of “Hang Ups” is delightfully raw and more ramshackle than the final version while the rowdy “Situation” reminds of Rod Stewart & the Faces and should probably have made the cut on the original album tracklist.

Ditto for “Harboring A Fugitive,” a feedback-laden slab o’ punky power-pop with ringing guitars and enchanting instrumental drone; tailor-made for ‘90s era rock radio it could have cut through the grunge onslaught on the FM band. The band’s contribution to Kevin Smith’s 1994 cinematic debut Clerks, “Making Me Sick,” is chunky and discordant enough that it should have leapt off the soundtrack and grabbed the audience by the ears. Of the alternative versions, none really stand out as superior to the final line-up, tho’ the charming “Tiny Pieces” comes close with Stinson doing his best Westerberg vocals. The unreleased instrumental cover of Terry Reid’s “Speak Now Or Forever Hold Your Piece” is a fine, high-octane showcase for Stinson’s underrated six-string skills (and another track that should have made the album).


For long-suffering Bash & Pop fans, Omnivore’s reissue of Friday Night Is Killing Me provides just the right amount of a good thing, offering the true believer a wealth of engaging bonus tracks that shed a light on the band’s in-studio creative process. The original eleven-song album stands proudly enough on its own as one of the long-lost semi-classic recordings of rock ‘n’ roll but was overshadowed (and out-sold) at the time by grunge-y outfits like Nirvana, Smashing Pumpkins, and Pearl Jam. Whether with the Replacements or fronting Bash & Pop, though, Tommy Stinson a considerable talent as well as a talented songwriter and bandleader; Friday Night Is Killing Me the moment he stepped out of the shadows of his notorious band and began to make a name for himself. Grade: B (Omnivore Recordings, released September 8, 2017)

Buy the CD from Amazon.com: Bash & Pop’s Friday Night Is Killing Me
Posted by Rev. Keith A. Gordon at Monday, September 18, 2017