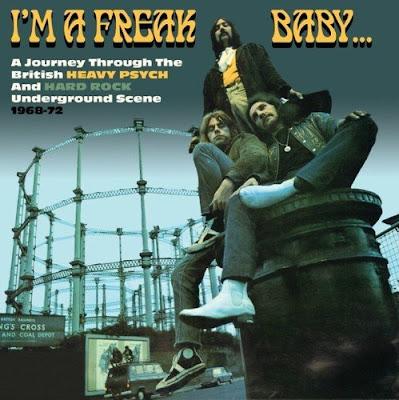 The 1960s were, indeed, a magical time for rock ‘n’ roll as bands across the planet took on the challenge laid down by Chuck and Elvis and tried to make the music bigger, better, and bolder than before. From British Invasion bands like the Beatles and the Rolling Stones, the Who, the Kinks, and Eric Burdon and the Animals to the psychedelic revolution (R.I.P. 1968), folk-rock (The Byrds), country-rock (The Flying Burrito Brothers), blues-rock (Cream), roots-rock (The Grateful Dead) and all the other sub-genre hyphenates, the decade was one of innovation, experimentation, and youthful artistic expression that has yet to be equaled.

As for the Reverend, well, I’m a freak, baby…born too late in the ‘boom’ to be a ‘60s-era flower child and too early to be a hardcore punk, your humble critic was definitely a child of the 1970s. The early ‘70s, that is…the Flamin’ Groovies, the Dictators, the New York Dolls and all the ramblin’, rockin’ mutants of the monster that arose during the first five or six years of the last American decade. Although I appreciate and love much of the music of the ‘60s, it’s the harder-edged jams of my high school daze that still strike a chord with my jaded, beleaguered medulla oblongata. So when I found out about I’m A Freak, Baby..., a three-disc box set sub-titled “A journey through the British heavy psych and hard rock underground scene 1968-72,” well, as they say, that’s my cuppa...


Any musical compilation of this sort has its omissions, usually due to licensing fees or refusals, so there is always somebody who stays home that really should have attended the party. In this case, the band most glaringly AWOL is Black Sabbath, who definitely played a part in Great Britain’s heavy psych and hard rock scene in the late 1960s and early ‘70s. Ozzy and his gang of hoodlums aside, I’m A Freak, Baby… features an impressive roster of heavy-hitting professionals (folks like Deep Purple, Uriah Heep, Fleetwood Mac, and the Yardbirds), hard-rockin’ obscurities (U.K. bands like Stray, the Move, the Pink Fairies, and the Groundhogs that should have been monsters stateside), and heavy-handed amateurs (the Mooche, Velvett Fogg, et al).

You’ll also find your share of eccentrics (Edgar Broughton), cult faves (Wicked Lady), and stepping stones (bands like Skid Row and Taste that gave us Gary Moore and Rory Gallagher, respectively) among the 48 tracks and number of bands spread across these three discs. The great, underrated Stray kick off the festivities on CD1 with the nine-minute-plus guitar-driven insanity that is “All In Your Mind,” as good a mind-blowing psych-rock jam as you’ll hear to date, with blistering percussion, swirling rhythms, and ear-splitting axe-wrangling creating more acid-drenched ambiance than you’d have thought possible in 1970. Guitarist Del Bromham led this band of merry pranksters for a decade and a handful of sadly overlooked, hard-rockin’ albums; but Stray was always on the outside looking in as friends and contemporaries like Free and Deep Purple became big rock stars.


The Mooche only released one single during their lengthy existence, an inspired cover of the Texas psychedelic classic “Hot Smoke and Sassafras” that won’t make you forget the Bubble Puppy’s original, but it ain’t half-bad, either, with stinging fretwork and explosive percussion. Chicken Shack has been guitarist Stan Webb’s baby since the late ‘60s, the band one of the original British blues-rock pioneers but, as shown by their take on the blues standard “Going Down,” although Webb could wield a mighty riff, they lacked the spark of charisma that might have led to stardom. The Groundhogs were also first gen Brit blooze-rockers, and with singer, songwriter, and guitarist Tony McPhee at the helm, they cranked out such period gems as “Cherry Red,” a menacing, bluesy bludgeoning that boxes your eardrums into submission like a punch-drunk heavyweight.

One of the lesser-known but no less talented bands on I’m A Freak, Baby... is Factory, whose 1971 track “Time Machine” is a not-so-subtle cross of Black Sabbath-styled sonic tsunami and Hawkwind-flavored cosmic Sturm und Drang guaranteed to flip your wig. The box set takes its name from the previously-unreleased Wicked Lady track “I’m A Freak,” itself a lysergic-fueled romp across a surrealist landscape with locomotive rhythms and muddy, tho’ deceptively pointy-edged guitars. Speaking of Hawkwind, they show up here in one of their earliest incarnations as Hawkwind Zoo, longtime frontman Dave Brock’s “Sweet Mistress of Pain” a textbook example of psych-rock circa ’69, the song displaying just a hint of the stratospheric ambition that band would later pursue.


Writing On The Wall’s “Bogeyman” launches CD2, the song’s sneaky Scottish jig intro rapidly giving way to a hypnotic riff and somber veil of sound. By contrast, “Fireball” provided Deep Purple Mark II with a Top 20 hit single on the strength of Ian Gillan’s soaring vocals, Ritchie Blackmore’s unforgiving six-string guillotine, and the bombastic rhythm second of bassist Roger Glover and drummer Ian Paice. Although Jon Lord throws in a few keyboard licks, this is definitely Gillan’s show here. Jerusalem is one of those legendary cult rock bands that many have heard of but few have actually heard. Their “Primitive Man” is a fair-to-middlin’ romper-stomper, but they’re definitely outshined by some of their colleagues here.

The Edgar Broughton Band is another obscure cult fave, and rightfully so, Edgar and his crew probably too damn weird for the Top 40 but mighty entertaining nonetheless. “Love In The Rain” is one of their better-known songs, a cacophonic mix of slash ‘n’ burn instrumentation and anguished vocals that channel pure white light/white heat. Little Free Rock were fellow travelers on the British blooze-rock circuit, their stoned classic “Dream” a Cream-inspired sludge of squealing guitar licks and throbbing bass riffs backed by bulldozer drums and an overall smothering, claustrophobic production that made them seem louder than they actually were. Speaking of loud, how about Iron Claw, a proto-metal outfit comprised of teenaged Sabbath acolytes. The dino-stomp of the band’s “Skullcrusher” is marred somewhat by its rattletrap production, but the sincerity and ambition of the band’s effort cuts through the dense, foggy mix.

Race With The Devil 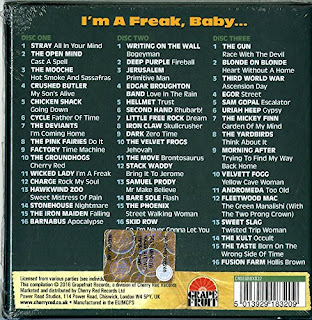 Members of the Phoenix were industry pros by the time they recorded the previously-unreleased “Street Walking Woman” in 1969, the band’s roots dating back to the ‘50s. They slotted nicely with the bluesy vibe of the era, though, and while this under-produced track suffers from a cavernous sound, the scorching guitar and stellar rhythmwork comes through. Skid Row (no, not the ‘80s nerf-rockers) was guitarist Gary Moore’s first band of note, and “Go, I’m Never Gonna Let You” certainly offers up plenty of six-string pyrotechnics amidst its dirge-like blues-rockin’ style. Not half bad, and fitting within the era, but Moore would go on to do (much) better.

The third disc of I’m A Freak, Baby... is perhaps the weakest of the set, but you can’t fault opening track “Race With The Devil” by proto-metal rockers Gun. Featuring one of the finest mind-bending riffs of the era, the early power trio (including brothers Adrian and Paul Gurvitz, later to form Three Man Army) delivered a performance that is an unrelenting terminator of heavy rock that influenced Jimi Hendrix, the song later covered by metal pioneers Judas Priest. Sam Gopal were an influential and innovative gang of late ‘60s acid-rockers whose chaotic, blustery “Escalator” features one Lemmy Kilmister before he lit out for Hawkwind and eventually forming the great Motörhead.


Uriah Heep’s “Gypsy” is one of many fan favorites in the band’s epic catalog of songs, and although the lyrics are laughable today, you just can’t ignore the song’s Godzilla-strength riffs, Ken Hensley’s haunting keys, and frontman David Bryon’s soaring, operatic vocals. Although they were infinitely influential, the Yardbirds weren’t necessarily considered one of the heaviest bands of the era. This late-period track, “Think About It,” featuring Jimmy Page’s circular riff and driving percussion, is pretty tasty and about as heavy as the band ever achieved, the song itself a sort of sonic trial run for Page’s blues-rock experimentation with Led Zeppelin a mere year later. The power trio Andromeda was an early showcase for the immense talents of guitarist John du Cann, later of Atomic Rooster, Hard Stuff, and even Thin Lizzy. Andromeda’s “Too Old” is a fine example of the band’s craft, a flashy psych-rocker with staggering guitars and busy percussion.

When guitarist Peter Green left John Mayall’s band, he enlisted Bluesbreakers alumni John McVie and Mick Fleetwood to form Fleetwood Mac. A far different band than they’d later be, “The Green Manlishi” is a brilliant slab of acid-blues with a spooky vibe and a dense, complex, sound. The Taste introduced the world to the phenomenal talents of beloved blues-rock guitarist Rory Gallagher, “Born On The Wrong Side of Time” originally the B-side of the band’s first single. The performance is solid if unspectacular, showing only brief flashes of the electricity Gallagher would bring to his later solo work, the song nevertheless displaying a small part of the guitarist’s songwriting genius with a few musical swerves, interesting rhythmic choices and, of course, stunning fretwork.


Among the bands unmentioned above but included in I’m A Freak, Baby... are such über-cool outfits as the Deviants, the Pink Fairies, the original Iron Maiden, Stack Waddy, Blonde On Blonde, Third World War, and the Move, among others. If you’re a fellow ‘70s rock ‘n’ roll fanatic, the three discs here will introduce you to a handful of bands you many not know and remind you of a few bands you may already know and love. The mix of music is an inspired blend of the well-known, the barely-known, and the unknown, all of whom contributed to the evolution and vocabulary of rock ‘n’ roll music. What are you waiting for – get it! Grade: A (Grapefruit Records, released August 5, 2016)