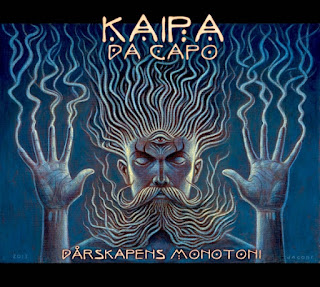 The Swedish band Kaipa are legends in the world of progressive rock, and justifiably so. Originally formed in 1973 as ‘Ura Kaipa’ by keyboardist Hans Lundin and bassist Tomas Eriksson, the band recruited 17-year-old hot-shot guitarist Roine Stolt and drummer Ingemar Bergman, dropped ‘Ura’ from their name, and recorded an acclaimed self-titled 1974 debut album.

This line-up recorded a total of three albums in the early ‘70s that put them in the same class as prog-rock giants as Genesis, Yes, and Pink Floyd, the band touring Europe and performing over 100 shows each year. Stolt left Kaipa in 1979 to pursue a solo career and do session work, the guitarist later forming the Flower Kings in the mid-‘90s. Kaipa carried on without Stolt, who rejoined the band in the early 2000s for a trio of albums.

In 2014, original Kaipa band members Stolt, Bergman, and Eriksson re-grouped under the name Kaipa DaCapo to perform songs from the first three Kaipa albums as well as create new music. The three are joined by Stolt’s younger brother Mikael on vocals and guitar, and renowned Swedish keyboardist Max Lorentz. These five talented musicians have recorded a new album, titled Dårskapens Monotoni, which will be released on October 25th, 2016 by Foxtrot Records. You can get a taste of it via the video ‘trailer’ offered below.

Since his tenure with Kaipa, Roine Stolt has become a bona fide prog-rock legend himself, recording a dozen studio albums with his band the Flower Kings and four studio albums with Neal Morse (Spock’s Beard), Mike Portnoy (Dream Theater), and Pete Trewavas (Marillion) in the prog supergroup Transatlantic. Stolt has most recently been touring as a member of guitarist Steve Hackett’s band, and released the critically-acclaimed album Invention of Knowledge, a collaboration with Jon Anderson of Yes, earlier this year. Prolific to a fault, Stolt is working with Anderson on a sequel to their acclaimed album, and possible live shows of the Anderson & Stolt Orchestra in 2017.