The Rev’s Let It Rock! book hits the shelves! 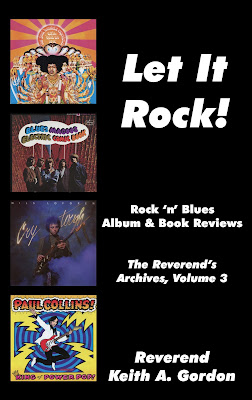 The third volume of the Reverend’s personal archives, Let It Rock! is now available for order from Excitable Press and Amazon.com. Named for the classic 1960 Chuck Berry song, Let It Rock! is a collection of over 100 rock ‘n’ blues album and book reviews penned by the “Reverend of Rock ‘n’ Roll,” Rev. Keith A. Gordon over the course of his 44+ year career as a rock critic and music historian.

From classic rockers like King Crimson, Hawkwind, and Jimi Hendrix to relative newcomers like Graveyard and the Black Keys, if you love music, Let It Rock! is your guide to your next album purchases! Published on October 4th, 2016, you can order an autographed copy of Let It Rock! directly from the Reverend for $14.95 postpaid in the U.S. or $20.95 for Canada by using the PayPal buttons below. European orders should be made through Amazon.com. Let It Rock! is a 5.5” x 8.5” trade paperback, a respectable 274 pages and profusely illustrated with album cover artwork.

What critics had to say about Rollin’ ‘n’ Tumblin’, the second volume in the Rev’s archive series:

“To say that the good Reverend Keith A. Gordon knows a thing or two about the blues is akin to saying that a duck likes water…” – Terry Mullins, Blues Blast magazine

“More of a reference work than a tome designed to be read cover to cover, Rollin’ ‘n’ Tumblin’ is a useful consumer guide to the world of currently-available blues (and blues-informed) music.” – Bill Kopp, Musoscribe blog

“These are actual, genuine, honest-to-Wolf, get-your-mojo-workin’ blues reviews, the kind that display an abiding passion for the artform, an appreciation for and deep knowledge of its history, and most important, the kind of descriptive, illuminating and no holds barred style of writing that serves to make its subject come alive.” – Fred Mills, Blurt magazine