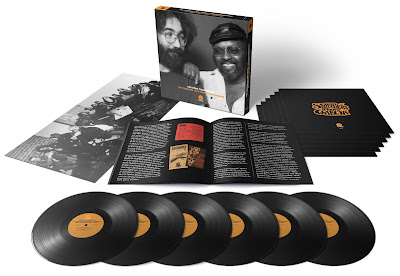 A little-known and, in my humble opinion, underappreciated part of the late, great Jerry Garcia’s milieu is the great music the guitarist recorded with Bay Area keyboardist Merl Saunders. Although Garcia’s musical credentials are well-established, those of his long-time friend Merl are less familiar to a general audience. A talented musician conversant in several genres, including rock, jazz, and world music, Saunders first met and began playing with Garcia in 1970 and, with his Merl Saunders and Friends band, performed with artists as diverse as Mike Bloomfield, Vassar Clements, and David Grisman. An in-demand session player, Saunders – who passed away in 2008 – recorded with folks like Bonnie Raitt, Taj Mahal, Betty Davis and, yes, the Grateful Dead.

For better than five years during the early ‘70s, Saunders took part in a weekly jam session at various San Francisco venues with Garcia, bassist John Kahn, and drummer Bill Vitt. Two nights at the Keystone in July 1973 were recorded and released that year as Live at Keystone, a double-album that is frequently overlooked by all but the hardest core Jerry/Dead fans. The album was subsequently reissued on CD in 1988 as two separate discs with bonus tracks, and later a pair of CDs titled Keystone Encores were released featuring even more material from the two nights. The whole kit ‘n’ caboodle was reissued in 2012 as a four-CD set called Keystone Companions: The Complete 1973 Fantasy Recordings which included all the material from the four extant CDs along with seven previously-unreleased tracks, all presented in the order they were performed in concert. 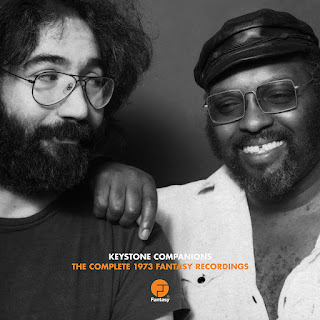 On October 28th, 2016 Fantasy Records, a division of Concord Bicycle Music, will release Keystone Companions as a deluxe, six-album vinyl box set – two-dozen tracks total pressed onto magnificent black 180-gram vinyl. Re-mastered from the original tapes and presented in the order the songs were originally performed on July 10th and 11th, 1973 at the Keystone club in Berkeley, the performances were originally recorded by Grateful Dead associates Betty Cantor-Jackson and Rex Jackson, with the four musicians are credited as the album’s producers. The set includes a gorgeous accompanying booklet with never-before-seen photos and updated liner notes by Grateful Dead expert David Gans as well as a collectible poster.

With these performances, Saunders, Garcia, and the gang delve into a delightfully wide-ranging set list that spans blues, jazz, rockabilly, Motown, and even reggae with a cover of Jimmy Cliff’s classic “The Harder They Come.” Keystone Companions includes original material like “Merl’s Tune” and “Keepers” as well as classic R&B tunes like “I Second That Emotion” and “How Sweet It Is (To Be Loved By You)” and vintage blues gems from Lightnin’ Hopkins (“Someday Baby”), Blind Lemon Jefferson (“One Kind Favor”), and Arthur “Big Boy” Crudup (“That’s All Right, Mama”). The band even re-imagines a pair of Bob Dylan tunes with inspired covers of “It Takes A Lot To Laugh, It Takes A Train To Cry” and “Positively 4th Street.”

There’s some overlap in the songs from one night to another, but because of the band’s improvisational abilities, they’re not cookie-cutter performances. More than just another high-priced collectible, Keystone Companions offers enough great music to demand your attention.