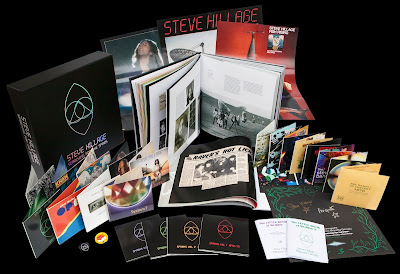 Although often overlooked when the talk turns to great guitarists, Steve Hillage should always be a part of the conversation. The skilled string-bender stands as one of the most influential and important progressive rock artists – possibly one of the reasons for the lack of appreciation of his talents by mainstream critics and music historians – and Hillage has made significant contributions to the language of guitar with bands like Gong and System 7 as well as with his own lengthy solo career.

On October 21st, 2016 Hillage will release Searching For The Spark, an awesome 22-disc box set that celebrates the guitarist’s lengthy and prolific career. Although the set definitely showcases Hillage’s extensive solo work, it includes plenty of other material to keep the prog-rock fanboy drooling for days. Searching For The Spark gathers all eight of Hillage’s solo albums for Virgin Records, seven albums of live performances, and four discs of demos and archive recordings, most of ‘em previously-unreleased, plucked directly from Hillage’s personal collection.

The box also includes rare photos, press clippings, and reviews in a 188 page book with a history of the artist penned by Gong expert Jonny Greene. Throw in three reproduction promo posters, two lyric booklets, a high-quality enamel badge, and a Hillage-signed certificate of authenticity, and you have a lot for the Hillage fan to like.

Musically, in addition to über cool and critically-acclaimed Hillage solo albums like 1975’s Fish Rising, 1976’s L, and 1977’s Motivation Radio, you’ll also get the very rare 1969 album Arzachel, recorded by Hillage with the members of British psych-prog band Egg and Shanty, the 1972 album by proggers Khan featuring Hillage and including 40+ minutes of previously unreleased material from Kahn’s Mark II line-up. You also get the first System 7 album, two BBC performances recorded live in 1976 and ’79, and much, much more!

Searching For The Spark ain’t cheap – as of this writing, it’s gonna cost you around $260 US – but that breaks down to less than $12 per CD for an awesome amount of great music. Pre-order it from the Burning Shed website or wait for it to show up on Amazon. Extra bonus: one lucky fan will find a special ‘golden ticket’ hidden inside their Searching For The Spark box set that entitles them to an exclusive gift from Steve Hillage. Really, what more could you want?