The Pink Fairies Get ‘Naked’! 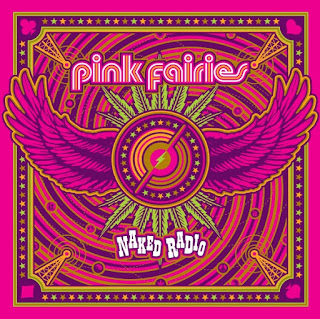 Legendary British rockers the Pink Fairies will be releasing their first album in three decades on November 4th, 2016 when Gonzo Multimedia releases the band’s Naked Radio. Fronted by singer and guitarist Andy Colquhoun, the band reunited in 2013 and has played a number of successful U.K. shows over the past couple of years. The Pink Fairies today are comprised of Colquhoun, bassist Sandy Sanderson, drummers Russell Hunter and George Butler, and keyboardist Jaki Windmill.

Formed in 1970 out of the ashes of infamous U.K. band the Deviants (which included Sanderson and Hunter), the Pink Fairies were active participants in London’s psychedelic underground rock scene of the early ‘70s. They promoted free music, drugs, and anarchy and were famous for stunts like playing for free outside the gates at the Isle of Wight Festival and Bath Festival of Blues and Progressive Music. The initial band line-up, which included guitarist Paul Randolph, Sanderson, and Hunter recorded a pair of cult classics in 1971’s Never Never Land, which included former Pretty Things drummer ‘Twink’, and the following year’s What A Bunch of Sweeties, which included a second guitarist in Trevor Burton.

Rudolph was replaced by future Motörhead guitarist Larry Wallis for 1973’s Kings of Oblivion, the final album of the era for the band and another bona fide cult classic. During much of the rest of the 1970s and early ‘80s, Pink Fairies members played in various bands, frequently with former Deviants bandmate Mick Farren, before the opportunity to record for Demon Records was offered. A new Pink Fairies line-up was formed around Wallis, Sanderson, and Hunter with Twink and Farren’s guitarist Andy Colquhoun to record the band’s last album, 1987’s Kill ‘Em and Eat ‘Em.

Drummer Russell Hunter, in a press release for the new album, states “it’s over 45 years since the first studio album and nearly 30 since the last. The passage of these years is inevitably etched to some extent on all these songs, some much deeper than others. But in the final analysis, they’re all some facet of the Pink Fairies.” Check out the video below and you'll agree that the band sounds every bit as wiggy as it always has...then buy the CD from Amazon.com!