CD Preview: Screamin’ Jay Hawkins Are YOU One of Jay’s Kids? 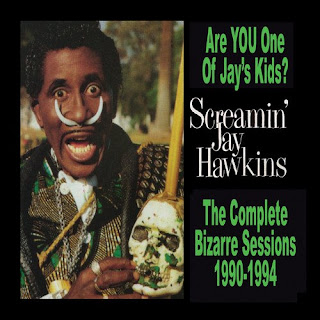 Rockin’ R&B legend Screamin’ Jay Hawkins is one of those cult artists that many are vaguely familiar with or, at a minimum, they know his best-known song, the 1956 hit “I Put A Spell On You.” Performing live, he’d be carried onstage in a coffin, leaping out at the audience with a bone in his nose and clad in voodoo regalia as he launched into song.

The primal proto-rock ‘n’ roll wildman was a major influence on theatrical rockers like Alice Cooper, the Cramps, Marilyn Manson, and Glenn Danzig while his signature hit has been recorded by artists as diverse as Nina Simone, Bryan Ferry, and Creedence Clearwater Revival, among many others.

Hawkins was always more popular in Europe than in the U.S. and his discography is sketchy at best, littered with dubious compilations released to capitalize on the enduring popularity of “I Put A Spell On You.” In 1990, however, Hawkins met up with Bizarre Records A&R man Robert Duffey, who would become the singer’s manager, getting him a deal with the Warner Music-distributed label. Hawkins would record three albums for Bizarre – 1991’s Black Music for White People, 1993’s Stone Crazy, and 1994’s Somethin’ Funny – before moving to France, where he’d die in 2000.

On May 18th, 2018 Manifesto Records will release the two-disc compilation Are YOU One of Jay’s Kids?, a 44-track collection that offers some of Hawkins’ best work for the Bizarre label. The album’s title is derived from Hawkins’ reputation as a ladies man, the singer allegedly fathering somewhere between 57 and 75 illegitimate children over the course of his lengthy career. The set includes a unique “dance version” of “I Put A Spell On You,” an incredible reading of the standard “Ol’ Man River,” and a pair of Tom Waits songs, “Heart Attack and Vine” (which would become a hit in the U.K.) and “Ice Cream Man.” The collection also includes five previously-unreleased bonus tracks and brand new liner notes by music journalist Chris Morris.

Of his creative relationship with Hawkins, Duffey says in the liner notes, “he was unique. He opened me up to a different kind of creativity. Jay wasn’t trying to make hit records. Jay was just trying to be Jay. He was trying to show the world Jay. He wasn’t a pretentious rock star.”

Buy the CD from Amazon.com: Screamin’ Jay Hawkins’ Are YOU One of Jay’s Kids?