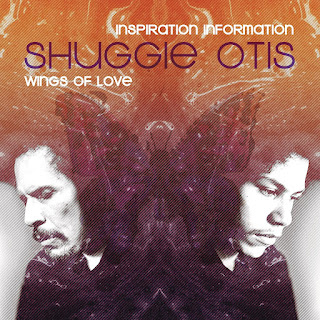 The truncated solo career of Shuggie Otis is one of those great mysteries of modern music. An enormously gifted guitarist and multi-instrumentalist born into a musical family (dad was R&B legend Johnny Otis – a singer, bandleader, and record producer who discovered Etta James), young Shuggie was playing professionally, in his father’s band by the age of twelve. He grew up amidst brilliant blues, jazz, and R&B musicians that helped inform and shape his talents, but Shuggie also found influences in 1960s-era artists like Jimi Hendrix, Sly Stone, and Arthur Lee of Love.

Otis had recorded several albums with his father as well as working on Al Kooper’s second Super Session LP (later re-named Introducing Shuggie Otis) before recording his solo debut, Here Comes Shuggie Otis in 1970, when he was just 16 years old. The phenomenal Freedom Flight album would follow a year later, yielding the classic song “Strawberry Letter 23,” a huge chart hit for the Brothers Johnson in 1977. Inspiration Information, which Otis began recording in 1971 and which was released in 1974, is widely considered to be the artist’s masterpiece. An understated collection of psychedelic soul and funk with the barest of blues influences, the album has grown in stature since its release, and artists as diverse as David Byrne of Talking Heads, Lenny Kravitz, Prince, and British electronic pop pioneers Stereolab have sung its praises.


Although a commercial disappointment upon its release in 1974, Inspiration Information has only grown in influence and importance since. The album opens with the title track, a low-key, soulful affair that boasts of a deep funky groove and syncopated vocals, with a little blues vibe creeping in at the edges. The lush instrumentation is balanced by ethereal backing harmonies, making for an odd combination of (then) contemporary soul-funk but harking back to the R&B jams of the 1950s and early ‘60s. The effervescent “Sparkle City” brings the fatback in a big way, Otis’s funky chicken-pickin’ accompanied by a big bass line and a slippery rhythm, the song boldly mixing jazz, blues, soul, and funk into a single invigorating listening experience. Otis’s vocals are understated and don’t drop into the mix until around two minutes in, but the meter of the lyrics matches the song’s overall rhythmic blueprint to create one fun mess!

This 2013 reissue of Inspiration Information includes four previously-unreleased bonus tracks tacked onto the original nine, two of which – the soulful, bluesy “Magic” and “Castle Top Jam” – were originally recorded in 1971 for the album but ultimately rejected, although both are quite good enough to have made the cut. “Things We Like To Do,” laid on tape in ‘77, is an unlikely marriage of old school R&B and 1970s-era soul, with muted vocals embroidered through a lush soundscape of rhythmic percussion, sumptuous strings, and “come hither” lyrics. 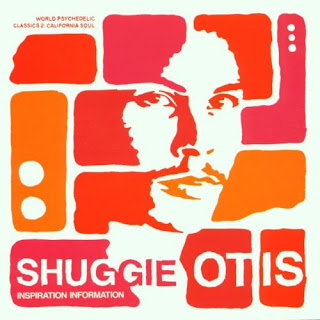 Inspiration Information circa 2013 also includes a second disc of tunes titled Wings of Love, a baker’s dozen of previously unreleased live and studio tracks pulled from the archive, cleaned up, and remastered by Otis personally. Offering material dating from as early as 1975 and as current as 2000, a lot of the songs on Wings of Love sound as good as, if not better, than those on Inspiration Information. Any combination of these 13 songs would have made a killer album in their own right, and the quality of performances from the late 1980s a the lone 1990 track show that Otis was still making great music even if few got the chance to hear it.

As Otis himself explains in the album’s liner notes, it’s not so much that he gave up on the music business when he all but disappeared from the spotlight after the 1974 release of Inspiration Information, it’s really more of a case of the business giving up on him. A lot of Wings of Love delves into the same soul-blues-funk turf as Information Inspiration, but material like the bouncy “Special” (1980) is every bit as satisfying as anything that Prince was dominating the R&B airwaves with at the time. “Give Me Something Good” should have owned radio in 1977, the song a dynamic mix of Hendrixian guitars and icy, Isley Brothers-styled funk, with strong vocals and a little R&B flavor added to the brew for good measure while “Tryin’ To Get Close To You” predates the aforementioned Prince’s best soul-funk efforts by a decade.

Wings of Love’s title track is an ambitious eleven-minute jam recorded in 1990 that blows anything Otis had done previous right out of the water. With gorgeous Spanish guitar leading into classically-styled synthesizer riffs, the song explores decades of musical themes, and the careful listener can hear elements of jazzy, 1940s-era torch songs (think Billie Holiday); 1970s-era prog-rock (with a pop edge, like Todd Rundgren); adventurous 1950s-styled rhythm and blues; 1970s influenced flights of fanciful guitar; and much, much more. It’s a stunning musical tour de force. The shorter-by-half “If You’d Be Mine” is, perhaps, its creative equal, the 1987 recording perfectly fusing rock, soul, and pop music together seamlessly in the creation of a truly electrifying performance.


To be honest, there’s not much in the way of blues music to be heard on Inspiration Information, Otis’s R&B roots hidden beneath mountains of psychedelic-soul and raunchy funk. “Fireball of Love” from the Wings disc probably veers the closest to a blues sound, the song’s raucous vocals and fretwork reminiscent of Johnny “Guitar” Watson’s funky 1970s era recordings. The acoustic “Black Belt Sheriff,” from 2000, is the most recent track and it displays a sort of Delta-styled country-blues vibe with some mighty tasty slide-guitar work.

Truth is, Shuggie Otis was a visionary musician of no little genius, his brilliance and talent unrecognized until a raft of acolytes picked up on Inspiration Information in the 1990s and spread the word to fellow travelers. Listening to the better than two-dozen tracks on this reissue, one can easily hear the pop, rock, soul, jazz, funk, and blues influences that Otis used to create a blueprint for some of the biggest, brashest, and most commercially-successful music of the 1980s and ‘90s. This is ambitious, sometimes complex stuff, to be sure, but it’s never difficult to listen to, and quite entertaining for those looking for depth, honesty, and artistry in their preferred music. (Legacy Recordings, released April 16, 2013)