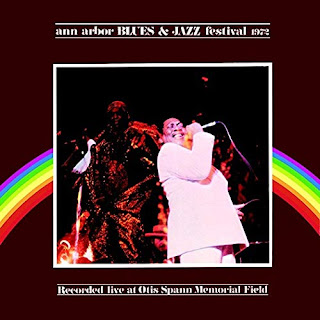 In the 40+ years since the event, the 1972 Ann Arbor Blues & Jazz Festival has become known as one of the premiere live concerts in blues history. Although the event was only attended by roughly 16,000 intrepid souls, it has since been blown up and exaggerated much like the original Woodstock Festival so that two or three times the actual number of attendees feel like they experienced the magic that occurred over that three-day weekend in September 1972, a familiarity bolstered, perhaps, by Atlantic Records’ release of a two-album set of performances from the festival in early 1973.

The festival was the brainchild of a group of University of Michigan students, with organizer Cary Gordon (no relation) at the helm. Receiving backing from both the school and Canterbury House, an Episcopal Church, the first Ann Arbor Blues Festival was held in September 1969. To find artists for the event, however, first Gordon, John Fishel, and other students travelled to Chicago, where they met with Bob Koester of Delmark Records and checked out artists at some of the city’s Southside clubs. To give their fellow students a taste of the blues, they booked a successful performance by the Luther Allison Trio at the school in the spring of 1969, and held the full-fledged festival in September.

Although the 1969 and 1970 Ann Arbor Blues Festivals were artistic successes, bringing a wealth of talent to perform, neither event was financially successful. After a year’s absence, during which time both Gordon and Fishel had left school, new U of M Events Director Peter Andrews was asked by the university to promote another festival. Working with former MC5 manager and White Panther Party founding member John Sinclair, they expanded the musical focus of the event and renamed it the Ann Arbor Blues & Jazz Festival. The pair held shows in 1972 and 1973, but after a disastrous attempt at promoting a 1974 festival in Windsor, Ontario, the event went on hiatus until the early 1990s.

As mentioned above, the 1972 festival was released on vinyl months after the event, but the album has been largely out-of-print until its 2014 rescue and reissue by Wounded Bird Records, a U.S. based archival label. Although Wounded Bird is primarily known for 1970s-era rock and jazz releases, they’ve done the blues world a large favor by releasing Ann Arbor Blues & Jazz Festival 1972 as a two-CD set. The briefest of glances at the track list will convince even the most traditional of blues fans to add this budget-priced set to their library. Boasting of performances by legends like Hound Dog Taylor, Koko Taylor, Bobby “Blue” Bland, Muddy Waters, Howlin’ Wolf, Freddie King, Luther Allison, Otis Rush, Bonnie Raitt, and others, how much more value could you expect for your dollar?

After a brief introduction, disc one of Ann Arbor Blues & Jazz Festival 1972 kicks off with the raucous “Kitchen Sink Boogie,” courtesy of Hound Dog Taylor & the Houserockers. Hot on the heels of his inaugural Alligator Records album release, Taylor and his red-hot band rip through the nearly-four-minute instrumental like a hot knife through soft butter, Taylor’s guitar screaming and screeching like a rabid beast while the rhythm section holds down a swinging boogie beat. Koko Taylor follows with her equally audacious performance of “Wang Dang Doodle.” Accompanied by the song’s writer, Willie Dixon, and backed by a band that includes guitarist Mighty Joe Young, pianist Rick Wright, and a full horn section, the duet raises the rafters with an energetic and rowdy showing.

The great Bobby “Blue” Bland brings a bit of smooth R&B vibe to his reading of “Ain’t That Loving You,” the singer silkily crooning the romantic lyrics while Dr. John (a/k/a Mac Rebennack) adds some elegant guitar licks. Speaking of Mr. Rebennack, his original “I Walk On Guilded Splinters” brings some New Orleans-styled swamp-blues to the stage, the original voodoo “Night Tripper” growling his vocals above a smothering, claustrophobic arrangement while backing singers add sweet backing harmonies. Howlin’ Wolf simply dominates the stage with his high-octane reading of “Highway 49.” Backed by a talented band that included guitarist Hubert Sumlin, pianist Detroit Junior, and sax legend Eddie Shaw, the Wolf roars through the song like a hurricane staggering through southwest Michigan.

Not to be outdone by his Windy City rival, the great Muddy Waters delivers an equally powerful rendition of his classic “Honey Bee.” With his wiry slide-guitar dancing in the background and harp player George “Mojo” Buford blowing a mournful riff, the performance captures the essence of the Chicago blues. Waters joins promoter John Sinclair and Lucille Spann, widow of former Waters band pianist Otis Spann, in dedicating the festival to the late bluesman. Mrs. Spann, joined by guitarist Mighty Joe Young, acquits herself well on “Dedicated To Otis,” a slow-burning, Chicago-style three-alarm fire fueled by Wright’s jaunty piano and Spann’s gritty, emotional vocals. Guitarist Freddie King keeps the party going with his lively take of Don Nix’s “Goin’ Down.” With David Maxwell banging away at the piano keys and Deacon Jones chiming away on the organ, King tears through the song with reckless abandon, his high-flying solos bringing down the house.

The great Luther Allison returned to Ann Arbor to brilliantly cover the classic Percy Mayfield ballad “Please Send Me Someone To Love.” While Allison’s stellar fretwork dominates any performance, the guitarist’s brassy horn section adds some punch to the song with its blustery blasts. Ann Arbor Blues & Jazz Festival 1972 offers just two bona fide jazz performances, the first of which – CJQ’s “Form Kinetic” – providing a little too much shrill instrumentation for my taste. By contrast, Sun Ra & His Solar-Myth Arkestra tickles your ears with their dissonant, improvisational take on “Life Is Splendid.” Both jazz numbers may sound a little harsh to the average blues fan, but they both provide a valuable snapshot of musical undercurrents in the early 1970s.

As good as all the above performances may be, I’ve barely scratched the surface of the eighteen artists represented on Ann Arbor Blues & Jazz Festival 1972. Junior Walker & the All Stars, Johnny Shines, Otis Rush, and the Boogie Brothers all deliver exemplary performances. Bonnie Raitt offers a fine tribute to her mentor Mississippi Fred McDowell with a three-song medley, and later joins Sippie Wallace on the stage for a lively recreation of the singer’s 1929 song “Women Be Wise.”

Taken altogether, there’s barely a wrong note on Ann Arbor Blues & Jazz Festival 1972, and if the artists and performances included on the set don’t prompt you to put down some hard coin for a copy, you’re probably not much of a blues fan in the first place. I hear that Taylor Swift has a new album out that might be more your taste. For those of us whose blood runs blue, listening to Ann Arbor Blues & Jazz Festival 1972 proves why the event has exceeded its humble roots to live on in memory. As good as this stuff is, however, I have to ask – is there any more tape from the festival in the vaults? I’m surely not alone in wanting to hear more music from this weekend in Ann Arbor… (Wounded Bird Records, released July 15, 2014)