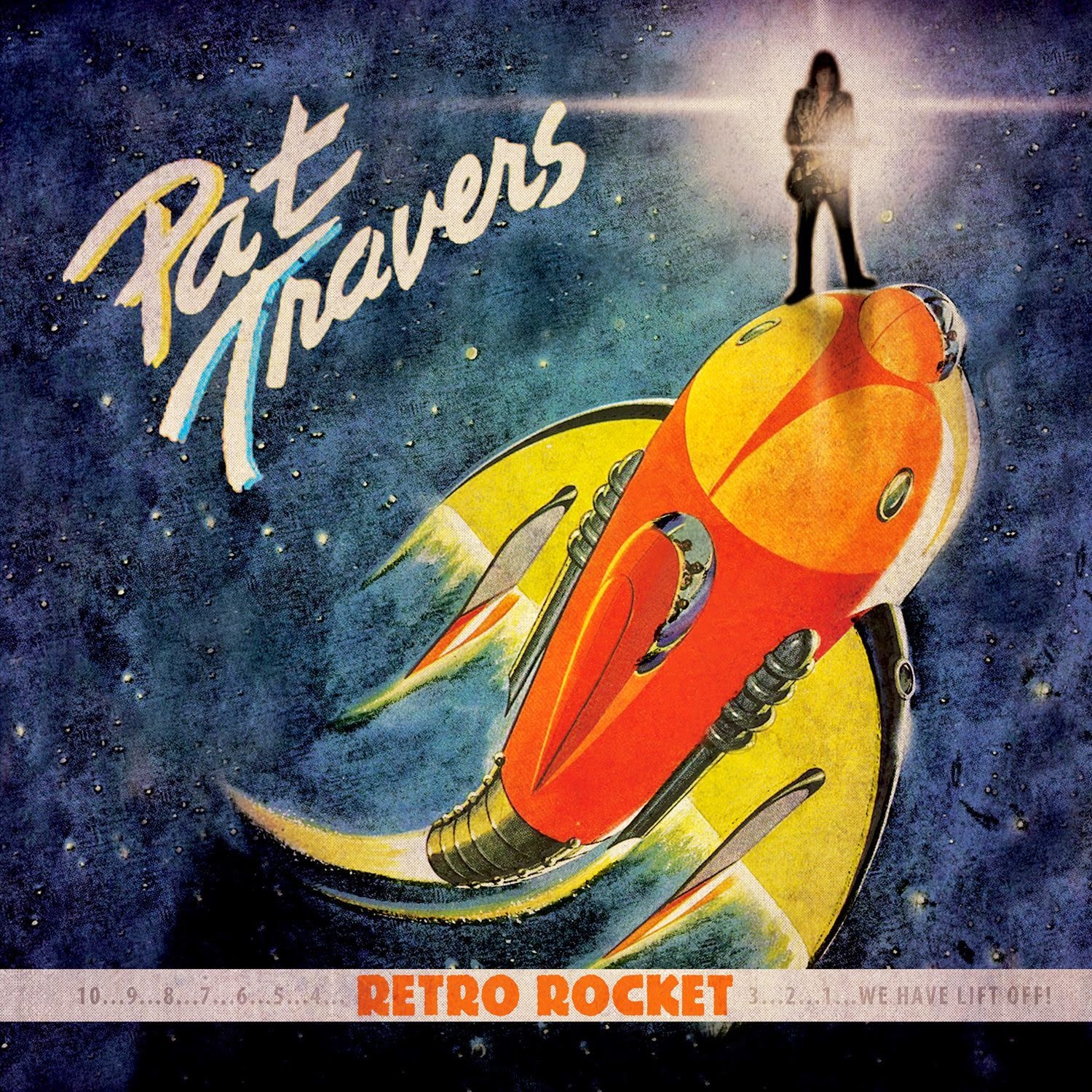 Guitarist Pat Travers earned his considerable reputation by playing aggressive, livewire rock ‘n’ blues music. Along with such contemporaries as Leslie West, Robin Trower, and Frankie Marino, Travers was a bona fide 1970s-era arena-rock guitar god. As musical currents changed during the mid-to-late ‘80s, though, Travers et al found themselves on the outside looking in, commercially speaking, as a new wave of punk, pop, and stylized rock washed away the heroes of the previous decade. The guitarist has soldiered on for better than four decades, pursuing his own unique vision of blues-rock music while playing to a loyal, if dwindling fan base.

To be honest, I didn’t expect much more than a good time from Retro Rocket, Pat Travers’ latest album. Although I’d heard and enjoyed a number of Travers’ post-2000 releases, some of them recorded with bassist T.M. Stevens and drummer Carmine Appice, none of the albums really broke new ground. Sure, Travers’ guitar playing has remained top notch, but often the performances were lacking in inspiration. So when I read that Retro Rocket was, in part, patterned after such late ‘70s and early ‘80s creative and commercial triumphs as Heat In The Street, Crash and Burn, and Black Pearl, I was hopeful. Nothing, however, could have prepared me for the rock ‘n’ roll juggernaut that is Travers’ Retro Rocket.


Retro Rocket leaps from the launching pad from the very first track, “I Always Run” fueled by a rampaging riff that’s met by wiry lead strokes before Travers’ whiskey-soaked vocals come roaring in. The six-string interplay between Travers and guitarist Jürgen Engler displays a primo, 1970s-style scorched earth style, the song’s driving rhythm (courtesy of bassist Scott Telles and drummer Lisa Cameron) building a perfect foundation for the dueling guitarists to dance atop. It’s a muscular song, a throwback to an earlier time, perhaps, when dinosaurs ruled the rock ‘n’ roll planet, but it strikes a perfect chord for this child of the ‘70s. Both high-flying and yet earthy, “I Always Run” defies any expectations you might have had of Retro Rocket.

“Searching For A Clue” is less affecting, perhaps, albeit just as pumped-up and steroidal as its predecessor, with stunning guitarplay and locomotive rhythms. The surprise of the opening cut may damper enthusiasm a bit for track two but on its own, “Searching For A Clue” is a no-frills rock ‘n’ stomp wailer that should pacify any guitar geek. Musically, “Who Do You Turn To” reminds of British blues-rock stalwarts Savoy Brown, the song displaying a similar blue-veined hue, but Travers’ vocals soar effortlessly over the song’s complex arrangement while the instrumentation builds to a chaotic crescendo that channels more than a little late ‘70s punk-rock energy in its anarchic sound and gnashing fretwork.


Damn, “Up Is Down” is a nearly perfect hard-rock romp, beginning with Telles’ Jack Bruce-styled opening bass line and Cameron’s crashing drumbeats and peaking with the psychedelic-tinged, yet bombastic guitar licks that dominate the song. You won’t find a more “old school” performance than this, but Travers and his merry pranksters pull out the stops to make it sound fresher than any of the young crop of retro-rockers currently plodding across the musical horizon. The song jumps effortlessly into “Mystery At The Wrecking Yard,” a sly little tale that delivers lyrical cheap thrills above relentless, devastating, wrecking-ball instrumentation that shreds metallic while welding shards of blues and acid-rock to the chassis. If this pyrotechnic display doesn’t rock you, then I can only conclude that you’ve assumed room temperature…in which case, it sucks to be you, don’t it?

Travers swaps bands for the final four songs on Retro Rocket, with drummer Sean Shannon bashing the cans and keeping time while bassist Neil Carpenter holds down the bottom end. Guitarist Joe Stump jumps in here for a couple of songs, “I Am Alive” being the better of the two, Stump and Travers laying waste to everything that lies before them. Stump brings a more brutal, metallic style for Travers to play off of on this lyrical statement of defiance, and it’s sheer delight hearing the two of them tear it up. Travers' “Hellbound Train” isn’t a cover of the Savoy Brown classic but rather a co-write by the guitarist and drummer Shannon. No less menacing than its namesake, this “Hellbound Train” rips up the grooves like an out-of-control tornado, Travers’ lower-register vocals delivered above raging guitar while the song’s crushing instrumentation paints a bloody backdrop.

In a somewhat different vein, a vintage live recording of “Looking Up” – the title track of Travers’ 1996 album – sounds a bit out of place…but only slightly, the song’s bluesy fretwork and explosive percussion tempered by a funky groove laid out by bassist Kevin Ryan. Travers’ solos are no less expressive, and just as powerful as any of the newer songs on Retro Rocket, so the song slots in here perfectly. Travers’ take on “Lead Me Home,” the theme from The Walking Dead TV show, is included here as a “bonus track,” and it’s a resonant lil’ sucker. Travers’ wailing vox are paired with some fine, shimmering git-picking that capture the spirit of the lyrics perfectly.


With nary a punter to be found on Retro Rocket, Pat Travers delivers a stunning tour de force that equals any of the classic albums he recorded during his halcyon years. Seldom has Travers’ playing sounded more vital, energetic, and passionate than it does here, and working on creating material that evokes his glory days while remaining contemporary in feel clearly lit a fire under the guitarist’s sleepy muse. Retro Rocket delivers an unabashedly hard-rocking set of guitar-driven songs that will make you fall in love with Pat Travers all over again… Grade: A (Purple Pyramid Records, released March 17, 2015)