Classic LPs by Joe Cocker & the Doors on SACD Audio Fidelity main man Marshall Blonstein has been on a helluva roll lately, licensing all sorts of classic rock and blues discs for re-release as Super Audio CDs on his label. With this latest announcement, however, I think that Mr. Blonstein may have outdone himself. On June 2nd, 2015 Audio Fidelity will release The Best of the Doors and Joe Cocker’s With A Little Help From My Friends on hybrid SACD discs.

There have been numerous “hits” compilations released on legendary L.A. rockers the Doors, both before and after the mysterious death of band frontman Jim Morrison. The Best of the Doors LP that was released in 1973 is considered the best collection by far, a potent single-disc effort that features eleven tracks total, including seven of the band’s eight Top 40 hits. Audio Fidelity is reissuing The Best of the Doors as a limited edition, numbered Quadraphonic 4.0 multichannel hybrid SACD. The two-channel stereo and DSD layers of the SACD were re-mastered from the original two-track tapes, which became available for the first time since 1970.

The 4.0 Quad layer of The Best of the Doors mirrors the earlier CD-4 QuadraDisc format, and the original Quadraphonic eight-track and reel-to-reel tapes. Rather than use the 1973 master as their source for these songs, Audio Fidelity preferred to use the original two-track master tapes of the band’s eight studio albums released between 1967 and 1971, providing the listener with the cleanest and most honest sound possible. The material deserves such white glove treatment, too, with songs like “Hello, I Love You,” “Soul Kitchen,” “Riders On The Storm,” “Love Her Madly,” and “Light My Fire” (all on The Best of the Doors) rightfully considered bona fide rock classics. 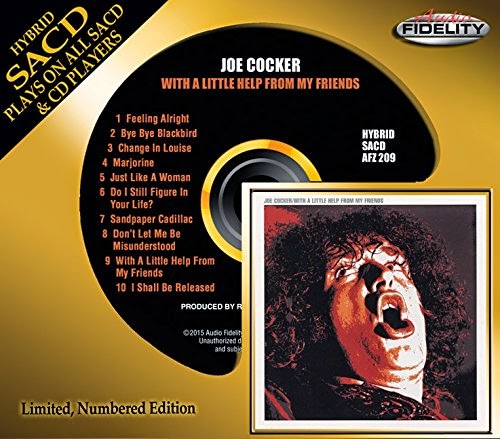 The other June release from Audio Fidelity is equally impressive. In honor of legendary British vocalist Joe Cocker’s death last December, the label is releasing the singer’s 1969 debut album, With A Little Help From My Friends, as a hybrid SACD. Backed by longtime stalwarts the Grease Band – which featured the talented guitarist Henry McCullough and keyboardist Chris Stainton – Cocker also had a few famous “friends” drop by the studio to help with the record, including guitarists Jimmy Page and Albert Lee, keyboardists Steve Winwood and Matthew Fischer (Procol Harum), and a heavenly choir that included backing singers Merry Clayton and Madeline Bell.

Cocker had already enjoyed a number one hit in the U.K. with his 1968 cover of the Beatles’ “With A Little Help From My Friends,” but the critically-acclaimed mix of rock, blues, and soul found on his full-length debut yielded a Top 40 hit in a cover of Dave Mason’s “Feeling Alright” while the album peaked at #35 on the U.S. charts and #29 in the U.K. Aside from the two hits, With A Little Help From My Friends features an inspired mix of covers like Dylan’s “Just Like A Woman” and “I Shall Be Released” and the Animals’ hit “Don’t Let Me Be Misunderstood,” as well as underrated originals written by Cocker and Stainton like “Marjorine” and “Sandpaper Cadillac.” If you haven’t heard Cocker’s soulful wail, this is the album to start with!

Buy the CDs from Amazon.com:
The Doors' The Best of the Doors SACD
Joe Cocker's With a Little Help From My Friends SACD
Posted by Rev. Keith A. Gordon at Sunday, April 19, 2015