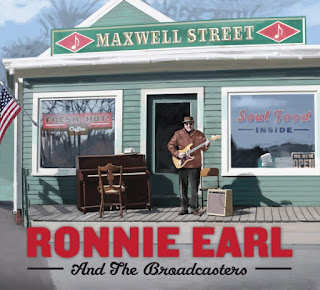 Chicago, Illinois enjoys a lengthy and well-deserved reputation as the “Home of the Blues.” Such giants as Muddy Waters, Howlin’ Wolf, Little Walter, and Junior Wells called the ‘Windy City’ home, and Chicago still offers some red-hot blues in the form of Nick Moss, Dave Specter, and Toronzo Cannon, among many others. But even for a city steeped for decades in the blues, no single street in Chicago is more indentified with the blues than Maxwell Street, former home of the Maxwell Street Market. From the 1930s until around 2000, the sound of blues could be heard up and down the street every Sunday as artists like Big Bill Broonzy and Blind Arvella Gray played for shoppers for spare change.

Maxwell Street features ten tracks, including six original songs as well as covers like Otis Rush’s “Double Trouble” (Rush a musical idol of Earl’s), Gladys Knight’s “I’ve Got To Use My Imagination,” Eddy Arnold’s “You Don’t Know Me,” and Don Robey’s R&B standard, “As The Years Go Passing By,” which has been recorded by a veritable ‘who’s who’ of blues and soul music, including Albert King, John Lee Hooker, Boz Scaggs, George Thorogood, Carlos Santana, and Eric Burdon & the Animals, among others.

“This album is dedicated to my big brother David Maxwell,” says Ronnie Earl in a press release for Maxwell Street. “We were born on the same day ten years apart. His playing was as deep as the ocean, as high as the sky and as bright as a quasar. When he passed, I felt a huge loss as I still do. David was a Broadcaster and he and I made a few records together. It was always a supreme honor to play with him. He played blues as well as jazz with incredible expression from Otis Spann to Cecil Taylor. He knew and loved it all. He became Otis Spann in the later years. Our pianist David Limina wrote a tune (“Elegy for a Bluesman”) that captures the feeling of the album and we all send our love and respect to David’s family and all of our love and gratitude for David Maxwell.”

Buy the CD from Amazon.com: Ronnie Earl and the Broadcasters’ Maxwell Street
Posted by Rev. Keith A. Gordon at Friday, August 12, 2016