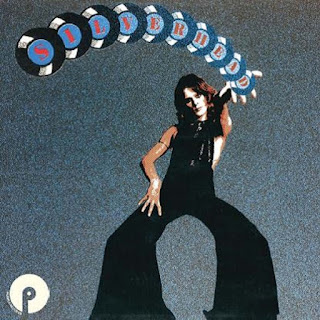 In the wild and wacky world of rock ‘n’ roll, “cult artists” are almost a given – no matter how popular a band may be, there’s still a bunch more folks who have never heard of ‘em. Hang around long enough and you may be bestowed with semi-legendary status (like, for instance, the Pogues…), but if you burn out quickly and leave a good looking corpse (figuratively speaking), you’re certain to be tagged with the “cult artist” albatross.

Although they’ve been reissued on CD a couple times over the past couple of decades, the albums never hung around long enough to experience “rediscovery” by the hipster elite, and Silverhead discs have remained a hard-to-find collectible. Here’s the good news, though – the kind folks at Cherry Red Records have announced the resurrection of Purple Records and will be reissuing the three-disc Silverhead catalog on deluxe CDs with a bunch of cool bonus tracks. The band’s two studio gems – Silverhead and 16 and Savaged – will be released along with a posthumous live album, Live At The Rainbow London, on August 12, 2016. 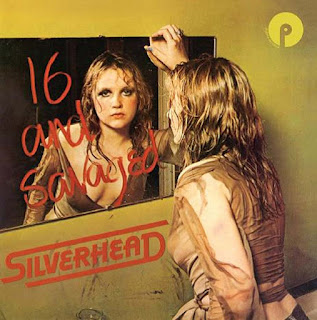 Silverhead debuted in 1972 as Purple Records’ tenth release, the band’s audacious introductory vinyl a cracking mix of metallic hard rock, glam, and proto-punk electricity. Produced by Martin Birch, who had previously worked with Deep Purple engineering albums like Machine Head and Made In Japan, the album kicked out the jams but sadly failed to chart in the U.S. or the U.K. in spite of the band’s high-octane performances and superstar sponsorship. The Cherry Red CD reissue adds to the original ten tracks with the 7” single version of the song “Ace Supreme” as well as three scorching live tracks previously released only in Japan, culled from Des Barres’ personal collection.

The album holds up well, however, my colleague Dave Thompson, in All Music Guide, writing “before Ratt, before Hanoi Rocks, before the New York Dolls, and before a lot of the British bands which history recalls as archetypal glam rockers, there was Silverhead, the first and positively the greatest metal band ever to dress up like a bunch of weird-looking hookers. Silverhead, this unsightly, unseemly, and unconcerned behemoth’s debut album, is strutting teenage trash of the first order. Guitars totter precariously on absurdly high heels, the rhythms are offering knee-tremblers in a backstreet alleyway some place, the lyrics drape lasciviously over anybody who'll hold them up, and the riffs will spend the night with anyone.”

Silverhead’s 16 and Savaged, originally released in 1973 and produced by Stuart Wicks – seemingly the only album he’s ever produced – saw the departure of guitarist Stevie Forest, who was replaced by Robbie Blunt (Bronco). Featuring a tawdry, memorable album cover and a tighter band chemistry courtesy of their hard touring ethic, critic and music historian Martin Popoff writes in his book The Collector’s Guide to Heavy Metal, Volume One: The Seventies that “this one’s a bit less of a pub rocker, although Silverhead remain squarely one of the best hard boogie acts of England’s golden age thereof” while All Music Guide’s Bart Bealmear calls 16 and Savaged “one of the most exciting records from the glam period…” This reissue disc includes the album’s nine original songs as well as six live tracks, a pair of long-lost songs from an unreleased third Silverhead LP, “James Dean” and “Marilyn,” as well as both sides of the promo-only debut solo single from Des Barres, “Leon” b/w “New Moon Tonight.” 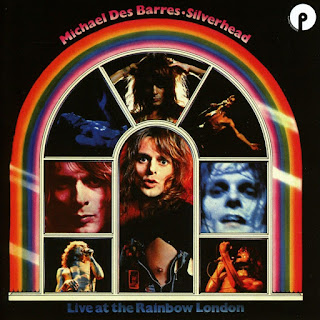 When 16 and Savaged stiffed commercially, the band would fall apart in late 1974 while working on their unfinished and unreleased third album. Before the break up, though, the band opened for Nazareth for a November 1973 show at London’s legendary Rainbow Theatre. Silverhead didn’t know that the concert was being recorded, and they delivered an incendiary performance that would be released exclusively in Japan in 1975 as Live at the Rainbow London, the album credited to Michael Des Barres and Silverhead. The original eight-track album featured some of the best songs from the two studio albums and this long overdue CD reissue includes a live version of “James Dean” and a cover of Chuck Berry’s classic “Roll Over Beethoven” as well as five unreleased songs from the band’s never-aired performance for the TV show In Concert, recorded at the BBC’s Paris Theatre in August 1973.

After Silverhead’s demise, Michael Des Barres relocated to Los Angeles where he formed the band Detective in 1975, a cult band not dissimilar from Silverhead, which recorded two albums for Led Zeppelin’s Swan Song Records label. Des Barres would later reappear in the early ’80s as the frontman of Chequered Past with the Sex Pistol’s Steve Jones, Blondie’s Clem Burke and former Silverhead bandmate Nigel Harrison, and Tony Sales from Tin Machine. Des Barres later found success as an actor while still performing music now and then, and he’s currently a deejay for Little Steven’s Underground Garage SiriusXM radio channel.

Harrison played with former Doors member Ray Manzarek’s band Nite City before joining Blondie and, subsequently Chequered Past while Robbie Blunt contributed to several of Robert Plant’s early ‘80s solo albums. Pete Thompson would play behind artists like Uriah Heep’s Ken Hensley and the Climax Blues Band’s Peter Haycock before becoming Robin Trower’s longtime drummer. As for Purple Records, the label set up by Deep Purple in 1971, it lasted until 1979 before closing up shop.

In the interim, aside from the band’s albums, the label released work from artists like Tony Ashton, Hard Stuff, Elf (with Ronnie James Dio), and Tucky Buzzard as well as solo albums from Purple members like Jon Lord, Roger Glover, and Glenn Hughes. Hopefully, given its revival of the Purple Records label, Cherry Red will soon be reissuing hard-to-get albums from some of the aforementioned artists.