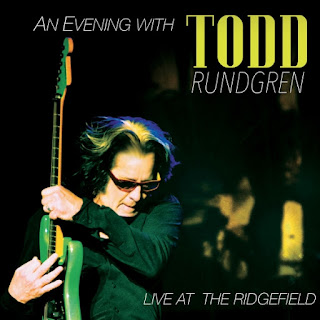 One of the most multi-talented artists in rock music, Todd Rundgren is a singer, songwriter, and producer; he’s a pioneer in the production and promotional use of video; he’s a computer software developer and interactive artist. Rundgren’s legacy is built on better than two dozen solo and studio and live recordings as well as a significant body of work recorded with his band Utopia. As a producer, he’s shepherded more than 50 albums to completion, including successful, charting albums by artists as diverse as Badfinger, Hall & Oates, the New York Dolls, Cheap Trick, Grand Funk Railroad, Meat Loaf, and Patti Smith, among many others.

Rundgren continues to tour and record, and on August 26, 2016 you can “spend an evening” with this legendary artist when Cleopatra Records releases An Evening with Todd Rundgren – Live at Ridgefield, a two-disc CD/DVD set recorded live at the Ridgefield Playhouse in Ridgefield, Connecticut on December 15, 2015. The album features live versions of some of Rundgren’s best-known and beloved songs, including hits like “Hello, It’s Me,” “I Saw The Light,” and “Bang the Drum all Day” as well as songs originally by his bands Nazz and Utopia.

The CD features eighteen songs, including material from a whopping ten Rundgren solo albums like 1972’s Something/Anything, 1976’s Faithful, and 1985’s A Cappella plus songs from three Utopia LPs, including 1977’s Oops! Wrong Planet, and from the acclaimed albums by Rundgren's early band the Nazz, 1968's Nazz and 1969's Nazz Nazz. The DVD offers seven additional songs, and a separate single-disc Blu-ray video version of the performance will also be released.

Accompanying Rundgren on stage for the show are longtime collaborators Jesse Gress (guitar) and Kasim Sulton (bass) as well as keyboardist John Ferenzik and drummer Prairie Prince (The Tubes, Jefferson Starship). An Evening with Todd Rundgren – Live at Ridgefield is presented in a special six-panel digipak and will also be available as a digital download and as a limited-edition, ten song vinyl album. Rundgren hasn’t released that many live recordings throughout a career that now spans six decades, making this one a ‘gimme’ for Todd fans and fans of classic rock ‘n’ roll.

Buy the CD/DVD from Amazon.com: An Evening With Todd Rundgren