The Return of the Living Dead back on vinyl for Halloween 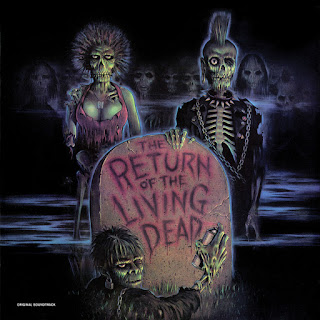 The Return of the Living Dead is credited as the first horror film to feature zombies dining exclusively on brains rather than just lumbering along as cannibalistic flesh-eaters, a fine distinction to be sure, but one that has carried over into subsequent horror films as well as TV shows. Something else the movie was known for was its high-octane punk-rock soundtrack, one of the first movies to rely on the genre as its musical backdrop. On October 14, 2016 Real Gone Music will reissue The Return of the Living Dead soundtrack on vinyl in several limited-edition variations.

Originally released by Enigma Records, the film’s soundtrack included songs by psychobilly legends the Cramps, U.K. punk trailblazers the Damned, and ‘60s cult rocker Roky Erickson as well as tracks from the Flesh Eaters, 45 Grave, Tall Boys, Jet Black Berries, 45 Grave, and T.S.O.L. Sadly, the label shoehorned in two ridiculous tracks by SSQ, an electronic dance band featuring singer Stacey Q that the powers-that-be at Enigma seemed to be enamored of at the time.

The Real Gone vinyl reissues feature the album’s original cover and label artwork and will be released in four variations: a grey “Brainsss” version, a black and red starburst version (an indie record store exclusive), an orange and green starburst version (available only from FYE/Transworld stores), all in editions of 720 copies, and a glow-in-the-dark version of 500 copies available only through the Real Gone Music website.