Man of the World: The Peter Green Story DVD 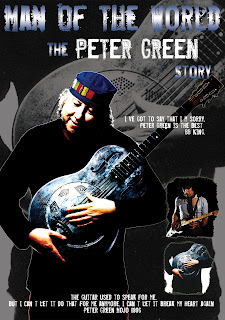 Legendary British blues-rock guitarist Peter Green first came to prominence as Eric Clapton’s replacement in John Mayall’s Bluesbreakers, a high-profile gig if there ever was one. After a short but storied tenure with Mayall’s groundbreaking outfit that included the classic 1967 album A Hard Road, the guitarist left Mayall’s employment to form Peter Green’s Fleetwood Mac with bassist John McVie and drummer Mick Fleetwood. A far different band than that which would light up the U.S. sales charts during the ‘70s, Green’s Fleetwood Mac delivered such timeless ’60s-era albums as English Rose and Then Play On which featured Green’s bluesy, sublime fretwork.

Fleetwood Mac’s initial success messed with Green’s mind, and he left the band in 1970, lending his talents to sporadic recordings by friends before almost entirely disappearing from the world of music altogether. Green resurfaced in the early ‘90s with the Peter Green Splinter Group and has since cemented his musical legacy with a string of acclaimed albums like 1999’s Destiny Road and 2001’s Time Traders. Green’s playing has influenced a generation of guitarists, talents as diverse as Gary Moore, Aerosmith’s Joe Perry, and Wishbone Ash’s Andy Powell citing Green as an inspiration. Green’s songs have been recorded by artists like Status Quo, Judas Priest, the Black Crowes, and Santana, among others, and Moore even recorded an entire album of Green songs, Blues For Greeny.

In 2009, Green was the subject of the BBC Four documentary film Peter Green: Man of the World, which was produced by Henry Hadaway. On November 18th, 2016 MVD Entertainment Group will release this film on DVD as Man of the World: The Peter Green Story. The film covers Green’s early success, his drug use and spiral into schizophrenia, and his artistic recovery and return to the recording studio and live performing. Featuring rare archive video of live and studio performances as well as still photos, Man of the World includes in-depth interviews with Green and bandmates McVie, Fleetwood, and guitarist Jeremy Spencer; producer Mike Vernon (who worked with the band on their early albums); Green’s official biographer Martin Celmins; and admirers like John Mayall, Carlos Santana, and Noel Gallagher of Oasis.

An amazing talent who has yet to earn his due, Man of the World presents an in-depth look into the life and career of the incredible Peter Green.

Buy the DVD from Amazon.com: Man of the World: The Peter Green Story