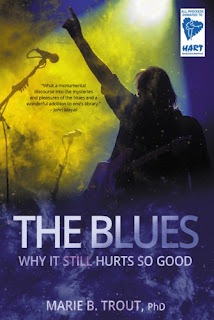 Dr. Marie Trout, PhD is a familiar name to most blues fans – the wife and manager of blues-rock guitar legend Walter Trout, Marie has spent much of her life immersed in the blues as both a fan and an industry professional. Two of the nicest people you’ll ever meet (in or out of the industry), Marie and Walter lived the blues with the guitarist’s recent life-threatening illness and subsequent liver transplant. The good Dr. Trout’s original academic research of blues fans has resulted in a powerful new book, The Blues – Why It Still Hurts So Good, scheduled for publication on February 3rd, 2017.

Using the “Grounded Theory” methodology of research, Trout studied blues fans, musicians, and industry professionals about the role that blues music plays with modern audiences. Dr. Trout surveyed over a thousand blues fans, and interviewed many others as well as musicians and others in the blues business, coming to the conclusion that the role of blues music for contemporary audiences, as well as its transformative musical potential, had not been sufficiently explored in literature. She found that today’s blues fans (primarily white baby boomers) are encouraged and strengthened by and find healing power in their love of the blues. Fans and musicians alike find the music raw, sincere, and “real,” as opposed to a frustrating, superficial popular culture. She also writes of the power of blues music to express difficult and complex emotions,

All proceeds from The Blues – Why It Still Hurts So Good will benefit The Blues Foundation’s HART Fund, which was established to assist blues musicians and their families in financial need due to health concerns, the fund providing acute, chronic, and preventive medical and dental care as well as funeral and burial expenses. In a press release for the book, Marie states “it is important for Walter and I to give back to the community that literally and figuratively bought stock in Walter’s liver. And to help musicians in need of help, is just passing on what we received. I hope many will find that the book gives them a new appreciation for, and understanding of, blues music. And simultaneously that the funds raised will be a blessing to those who are ill and are currently living the blues.”

Buy the book from Amazon: Marie Trout's The Blues - Why It Still Hurts So Good
Posted by Rev. Keith A. Gordon at Sunday, November 13, 2016