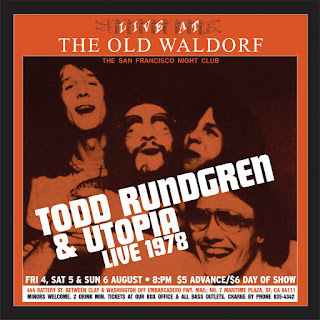 Few artists in rock ‘n’ roll have displayed the influence of a restless muse more than musical chameleon Todd Rundgren. The talented singer, songwriter, producer, and multi-instrumentalist has dabbled with a lot of different sounds through his lengthy career, but few have been as influential and enduring as his pioneering prog-rock band Utopia. Formed in 1973 as Todd Rundgren’s Utopia (so named so as to take advantage of the frontman’s modest fame), within a couple of years the band had shed the Rundgren label and gelled around a line-up of Rundgren on guitar and vocals, bassist Kasim Sulton, keyboardist Roger Powell, and drummer Willie Wilcox. Utopia had also evolved into a true band effort, with all four members writing material, singing on the albums, and sharing production and engineering duties.

Utopia released two influential and critically-acclaimed albums in 1977 in Ra and Oops! Wrong Planet, the former being more prog-oriented, the latter evincing more of a pop sound. Touring constantly, Rundgren and Utopia performed in San Francisco on August 5th, 1978 at The Old Waldorf, a show that was captured on tape for posterity. Appearing on CD in England late last year as the first official release for the concert (which shouldn’t be confused with the KSAN-FM radio broadcast from 1979 at the same venue), Utopia's Live at the Old Waldorf presents an inspired mix of Todd’s solo work (“Black and White,” “Hello, It’s Me,” “It Wouldn’t Have Made Any Difference”) and Utopia material such as “Trapped,” and “Abandon City.”

There has been a slate of semi-legit and authorized Rundgren and Utopia live discs released in the last couple of years, but few of these titles have appeared on vinyl. On December 2nd, 2016 the good people at Real Gone Music will release Utopia’s Live at the Old Waldorf as a limited edition double-LP set on glorious gold vinyl in a gatefold sleeve in a run of 1,000 copies. Featuring sixteen smokin’ performances spanning four sides, you can order your vinyl copy of Live at the Old Waldorf from Amazon.com or directly from the Real Gone Music website.
Posted by Rev. Keith A. Gordon at Friday, November 04, 2016