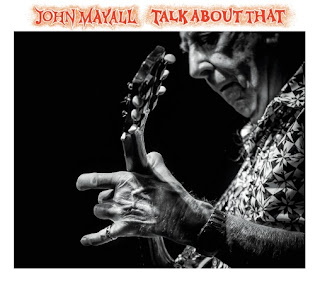 British blues legend and Blues Hall of Fame member John Mayall has finished up a new CD titled Talk About That, scheduled for January 27, 2017 release by Forty Below Records, and that’s good news indeed! Working with his longtime band members Rocky Athas (guitar), Greg Rzab (bass), and Jay Davenport (drums), the talented multi-instrumentalist Mayall co-produced Talk About That with Forty Below President Eric Corne at the House of Blues Studio in Encino, California.

Talk About That features eleven tracks, including eight original songs and smokin’ covers of Memphis soul legend Bettye Crutcher’s “It’s Hard Going Up,” bluesman Jimmy Rogers’ “Goin’ Away Baby,” and rocker Jerry Lynn Williams’ “Don’t Deny Me.” Of the original tunes, the New Orleans-flavored “Gimme Some of That Gumbo” features a three-piece horn section to spice up the recording. The album also features former James Gang/Eagles guitarist Joe Walsh performing on the Mayall originals “The Devil Must Be Laughing” and “Cards On The Table.”

“When I first had the idea for the title track, ‘Talk about That,’ I wanted to write lyrics that were about aspects of life that were running through my head,” says John Mayall in a press release for the new album. “I also wanted to give the song a modern groove that would convey the fun mood driving the piece. Greg and Jay laid down a really infectious rhythm for me to feature my keyboard chops and bring the song to life with a really funky feel driving it.” Mayall’s “The Devil Must Be Laughing,” which deals with the current political climate, was recorded in a single take and features Walsh’s dynamic fretwork.

The sessions for Talk About That also represent the last recordings created by Mayall’s longstanding four-piece band. Shortly after wrapping up the album, guitarist Rocky Athas parted ways with the band and will pursue his solo career. In a statement, Mayall said “due to severe storm conditions recently, guitarist Rocky Athas was unable to get out of Dallas for my recent festival shows that led to my performing as a trio. Having never performed anywhere or at any time without a guitar sidekick, I found that I was able to explore new territories in a trio configuration playing organ, keyboards, harmonica and guitar. Needless to say I was surprised at how different and stimulating the experience was for me as a performer.”

“So now, as Greg Rzab, Jay Davenport and I embark on several weeks of intensive touring all around the States,” says Mayall, “we hope you all will enjoy the fireworks coming your way as my live show calendar brings us to your expectant ears.” Check out the video of the making of Talk About That below and plan on catching Mayall and crew when they hit your hometown.

Buy the CD from Amazon.com: John Mayall's Talk About That