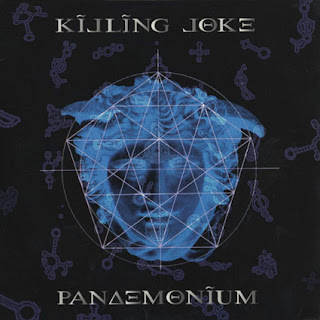 Arguably one of the most influential bands of the past twenty years, London’s Killing Joke is nonetheless the most obscure bunch of musical geniuses that you’ve never heard of. Chances are you’ve heard the work of the children these gray-beards stylistically fathered, however, with bands like Nine Inch Nails, Faith No More, Rage Against the Machine, and Ministry all owing Killing Joke a debt of creative gratitude.

Their ground-breaking hybrid of socio-political rage, technological overkill, industrial nihilism, and white noise was delivered via a handful of classic early eighties albums that would shape much of what would be created in the genres of punk, heavy metal and industrial music throughout the ensuing decade.

With Pandemonium, the band strips down to its original founding trio, buffing up its musical muscles and delivering an hour of unrelenting noise, fury and thought. Killing Joke have always been an ideological bunch of cynics, eschewing the depressing, suicidal aura surrounding much of Britain’s rock scene in favor of a realistic and hopeful vision of the world they find collapsing around them. Against a musical backdrop so heavy that it’ll send even the most jaded headbanger into a fit of manic glee, Killing Joke approaches the coming millennia with an almost metaphysical view, even sojourning to Egypt to record portions of Pandemonium in the King Chamber of the Great Pyramid.

The band’s collective experience of the past few years pays off with an expanded sense of creativity and lyricism, Pandemonium adding disparate strains of Middle Eastern and Asian culture to its blend of white light/white heat. The resulting effort lives up to the band’s heady legacy, even while it builds upon a bright new future for Killing Joke. (Zoo Entertainment, released 1994)