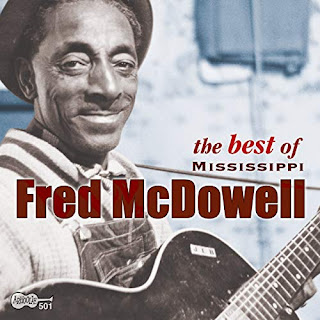 Like most rock fans, I came to know the legendary Mississippi Fred McDowell through the Rolling Stones’ version of his “You Gotta Move” and covers of songs by McDowell acolyte Bonnie Raitt. Once you discover the real thing, though, you’ll never go back.

Born in rural Tennessee in the early part of the twentieth century, McDowell started playing slide guitar at the tender age of fourteen. His parents died while he was young, and McDowell played for tips in the streets of Memphis while still a teen. He eventually tired of rambling and settled down to a life of farming in Como, Mississippi. It was here that folk music archivist Alan Lomax found McDowell some thirty years later, first recording this enormous talent in 1959.


McDowell’s “discovery” threw the folk and blues community on their collective ears as Lomax had found an authentic Delta bluesman that had never been captured on tape before. McDowell’s ambitions never led him to seek out the traveling “record men” who haunted the Mississippi cotton fields and backwoods, so no recorded legacy from the 1920s and ‘30s existed for modern listeners to familiarize themselves with McDowell’s considerable talents. Arhoolie Records founder Chris Strachwitz was one of those people amazed by McDowell’s music and the young producer promptly sought out the humble McDowell in Mississippi. Arhoolie recorded and released two excellent volumes of McDowell’s homespun country blues during the mid-‘60s, which subsequently made the artist a popular draw on the festival circuit throughout the decade until his death from cancer in 1972.

Arhoolie’s The Best of Mississippi Fred McDowell revisits material originally released by the label on four previous titles, and recorded between 1964 and 1969 in a number of different locations. Much like Arhoolie’s recent Lightning Hopkins compilation, this CD is a wonderful overview of the artist’s too-brief career. McDowell’s songs drew upon a Delta tradition that was heavily flavored by the work of contemporaries like Robert Johnson, Tommy Johnson, and Charlie Patton. McDowell brought a distinctive flair to his slidework, an impressive individualism that sets his playing apart from that of other Delta bluesmen. His voice was extremely expressive, showing a remarkable range and emotion.

The Best of Mississippi Fred McDowell offers up a stylistic cross-section of material, from the country blues of standards like “Good Morning Little Schoolgirl” to timeless McDowell originals like “Levee Camp Blues” and “You Gotta Move.” There are gospel tunes here too, McDowell’s performances echoing those of Blind Willie Johnson on traditional songs like “I Wish I Was In Heaven Sittin’ Down” and “Keep Your Lamp Trimmed And Burning.” The album closed with a previously unreleased 1965 live performance from the Berkeley Folk Festival.


Mississippi Fred McDowell was a powerful and charismatic performer, an artist that came into his own late in life but had spent a lifetime working hard and playing music long before his discovery. McDowell’s was a unique talent and vision, The Best of Mississippi Fred McDowell a wonderful introduction for the uninitiated and a welcome addition to the library for those of us still earning a degree in the blues. (Arhoolie Records)