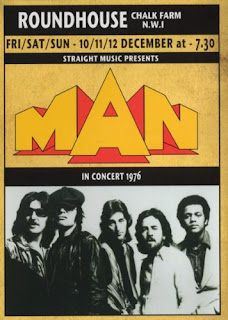 First things first – ya gotta remember that this is a DVD of a 32-year-old concert film. If you’re expecting a lovely, multi-camera digital tape with pristine 5.1 surround sound, well, you’re living in the wrong era, Charlie Brown. What you do get from At the Roundhouse 1976 is an engaging vintage performance by one of rock music’s most overlooked prog-oriented bands, Man.

At the Roundhouse 1976 features, perhaps, Man’s best line-up as far as pure talent and chemistry is concerned. The performance captured on tape includes vocalist/guitarist Mickey Jones, guitarist/vocalist Deke Leonard, keyboardist Phil Ryan, bassist John McKenzie, and extraordinary drummer Terry Williams. Man was formed by Jones and Leonard in 1969 in Swansea, Wales and was originally considered somewhat of a pub-rock band. Influenced by the San Francisco sound of bands like Quicksilver Messenger Service, Man also incorporated elements of blues, psychedelic and prog-rock into their unique sound.


Over the course of the band’s history, Deke Leonard would depart and return a number of times, recording brilliant solo albums before coming back to the comfort of the band atmosphere. Guitarist and keyboardist Clive John was an original member of Man, leaving during the mid-‘70s to pursue a solo career that resulted in a single highly-collectible album before disappearing from the scene. Williams, who came on board for the band’s self-titled third album, would later play with both Rockpile and Dire Straits.

At the Roundhouse 1976 was originally designed to be the band’s swansong, a final shot at glory captured for the ages on celluloid. After 1,500+ performances and 13 albums over the course of eight years, the band had decided to call it a day. Man returned to the site of their greatest triumph, London’s Roundhouse, where they had experienced their breakthrough performance for the Greasy Truckers Party benefit show and resulting LP. The band decided to say “farewell” to their fans with three nights at the Roundhouse, which were filmed for this DVD.

At the Roundhouse 1976 kicks off with the bluesy “Babe, I’m Gonna Leave You,” a rock-and-soul song with a distinctive rhythmic groove, Jone’s pleading vocals, and tasty twin guitars that mimic Quicksilver Messenger Service (just one of the band’s numerous influences). QMS had often performed this song in their early ‘70s concerts, and QMS guitarist John Cippolina had appeared with Man during the band’s 1975 tour, Man and Cippolina jamming together on the tune. Man kept the song in their set list, and here it’s captured for posterity in all of its funky glory!

“C’Mon” follows, beginning as a raucous call-and-response styled rocker with an odd, spacey interlude in the middle. Jones sings some nonsensical lyrics that are wedded to the strange tones that coaxes from his guitar. As the song stretches out, the band wanders into uncharted territory, each instrumentalist adding their own color to the overall musical tapestry. Leonard provides a few scorching leads, Williams’ powerful drums support the song’s unlikely structure, and Ryan’s keys lend an otherworldly hue to the song. The result is a breathtaking, unconventional jam.


“Let the Good Times Roll” is a jazzy blues romp. Leonard’s vocals aren’t particularly suited to the song, but they’re supported by Jones’ soulful backing vox. McKenzie sets a steady bass groove and Leonard’s stinging six-string accomplishes the expression that his voice couldn’t. “7171-551” is a swaggering, riff-driven up-tempo rocker that showcases Jones’ wild guitar leads and Leonard’s more deliberate, scorched-earth style. Both axemen rock hard throughout the song, infusing the rhythm with a thunderstorm of lightning fretwork and squalls of sound.

Leonard’s edgy, rough-hewn vocals are better-suited to “Born With A Future,” a less-than-subtle raver that provides short, sharp shocks of guitar pyrotechnics. There’s an unexpected slow passage where Jones lends his vocals above washes of keyboards, before he and Leonard dive into some fine harmonies. Leonard provides the song with some first class axe-mangling, riffing madly with reckless abandon as Jones throws his single-note leads into the deep, chaotic instrumentation.

The longtime audience favorite “Bananas” is provided an OTT performance; a balls-out rocker that fades into near silence before swelling with Ryan’s effervescent keyboard romps and Williams’ steady, potent drumbeats and fills. Jones adds a finely-crafted solo with hints of rich tone and McKenzie’s bass work is funky without overpowering the song’s unique vibe. Leonard’s vocals are crazed here, swapping back-and-forth with Jones more grounded voice, and the song ends the show as a last-man-standing instrumental free-for-all.

At the Roundhouse 1976 provides the viewer with a true concert atmosphere, sans smoke and crowd noise. The band’s performance is shot mostly in close-ups, more than likely by a lone pair of cameras. The DVD’s sound is quite good and consistent throughout, much better than I would have though given the age of the concert. Lighting is as good as one could hope for: spotlights sometime flare up into mini-sunspots of white light, but mostly the visuals are clear and well-lit. In-between songs, especially near the beginning, there are brief interviews and commentary by the band and its fans, and backstage footage shows the various band members loose and ready to roll. Forget about the tracklist on the rear of the DVD box, ‘cause it’s just plain wrong – the way that I outlined the performances above is how they play out on your TV screen.


By 1976, virtually all of Man’s progressive elements had largely disappeared from the band’s music, replaced by a hard rock edge that benefited from their explosive twin guitars and the powerful drumming of Terry Williams. Man would break-up after these Roundhouse performances, and a final live album culled from the shows would be released in ‘77 as All’s Well That Ends Well.

Jones would reunite with Leonard as Man a few years later, however, and over the past 25+ years former Man band members like Williams, Ryan and original bassist Martin Ace would rotate in and out of the roster for performances and recordings (many live). Man continues to perform in Europe to this day, and released the band’s most recent album, Diamonds and Coal, in 2007. (Voiceprint U.K.)

Review originally published by the Trademark of Quality blog, 2008

Buy the DVD from Amazon.com: Man’s At the Roundhouse 1976