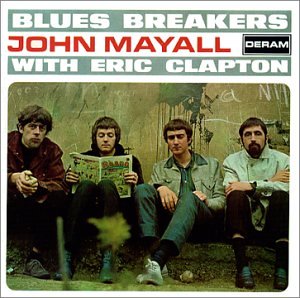 It’s hard to believe by listening to the sort of watered-down pap that Eric Clapton has cranked out the past few years, but at one time the big “King of all Guitar Gods” played with great style, passion and ingenuity. Look no further than Bluesbreakers with Eric Clapton to find documentation of the artist’s early six-string prowess.

Clapton first made a splash on the collective rock consciousness while handling the heavy axework for the Yardbirds. Although not the first posse of British dandies to get their hands dirty playing the blues, the Yardbirds were one of those who did it best, and Clapton’s early contributions went a long way towards establishing that band’s reputation. Clapton left the Yardbirds in 1965, beginning a lengthy artistic journey that would inevitably lead him to becoming the corporate shill that he is today.


First stop on the evolutionary express for the youthful Clapton was with John Mayall & Bluesbreakers, one of England’s best-known traditional blues outfits. Luring Clapton away from the Yardbirds was a major coup for bandleader Mayall. Getting the guitar wizard into the studio to record Mayall’s third album resulted in what may well be the best British blues romp to find its way onto tape. Clapton is allowed to stretch out on a set of blues and R&B standards such as Ray Charles’ “What’d I Say,” Freddie King’s “Hideaway,” the Otis Rush hit “All Your Love” and the blues classic “Parchman Farm.”

Choice Mayall originals compliment the covers on Bluesbreakers with Eric Clapton, especially the Mayall/Clapton co-written “Double Crossing Time,” which features an incredible Clapton solo that sounds like it descended straight from Maxwell Street in Chicago. Clapton even makes his debut as a vocalist, offering a fine rendition of Robert Johnson’s “Ramblin’ On My Mind.” Throughout Bluesbreakers with Eric Clapton, the guitar star’s axework is first rate, his playing fluid and innovative. Backed by a solid rhythm section that included future Fleetwood Mac namesake John McVie on bass and drummer Hughie Flint (who would go on to play on several Clapton solo elpees), Clapton had the necessary support to let his imagination fly.

Mayall was a strict bandleader, demanding a lot from his players but here he lets Clapton become the superstar he had the potential to be. Clapton would leave Mayall’s outfit after Bluesbreakers with Eric Clapton to form Cream and achieve international stardom. Mayall would run through a thousand and one band members during the next 35 years, discovering such talents as Peter Green (Fleetwood Mac) and Mick Taylor (Rolling Stones) along the way. Bluesbreakers with Eric Clapton would reach the British top ten and became one of the biggest albums of 1966 in the U.K.


The album remains a cult favorite in the United States while Clapton is better known for his subsequent work with Cream and Derek and the Dominoes. While rock ‘n’ roll fanboys continue to genuflect at the mention of the Yardbirds name, worshipping the trio of guitar gods that legendary band would produce (Clapton, Jeff Beck, and Jimmy Page), John Mayall’s Bluesbreakers are unfairly consigned to a lesser place in history. A spin or two of Bluesbreakers with Eric Clapton shows what the fuss was all about in the first place, placing the album among the greatest blues-rock efforts that the genre has produced. (Polydor Records, released 1966, reissued June 5, 2001)