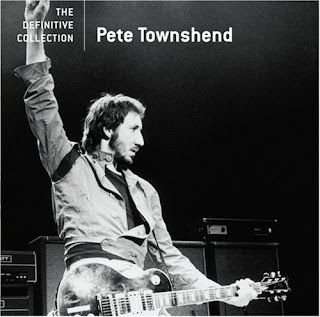 As the guiding force behind rock legends the Who, guitarist/songwriter Peter Townshend’s induction to the Rock & Roll Hall Of Fame was all but guaranteed. One of the original, first wave “British Invasion” bands that assaulted the colonies in the aftermath of the Beatles, the Who were blessed with a wealth of talent. All four members of the Who would have stood out in nearly any other band and, indeed, three of these four musicians would eventually succeed in their own solo endeavors.

Frontman Roger Daltry was a strutting, larger-than-life figure with a big voice and rock star charisma. Bassist John Entwistle played rock ‘n’ roll with an improvisational jazz sensibility, and was a better songwriter than most of his contemporaries. Drummer Keith Moon was an anarchic wildman, bashing and crashing the skins with reckless abandon. Then there was Townshend…an immensely gifted songwriter, a powerful guitarist and a whirling dervish onstage, leaping and spinning and seemingly flying on the wings of the music; he was also intellectual, introspective and often spiritually troubled.


Townshend was a prolific songwriter, one of the greatest in the history of the rock genre. His creative accomplishments with the Who are second only, perhaps, to those of John Lennon of the Beatles. What a lot of people seem to forget, however, is that Townshend also enjoyed a significant solo career, receiving overwhelming critical acclaim and some degree of commercial success. Townshend recorded demos of just about every song he ever wrote for the Who, and discarded more songs than the band ever recorded. A lot of this material has shown up in various “odds-n-sods” collections through the years, and Townshend’s own demo versions of songs have made his Scoop albums a series much sought-after by collectors.

Townshend’s first solo effort, Who Came First, was a low-key affair released in 1972 as an outlet for the songwriter’s growing catalog of material. Collecting songs unsuitable for the Who as well as more personal, spiritually-oriented material, the album offered an insightful glimpse into the depth of Townshend’s songwriting talents. “Sheraton Gibson,” an underrated cut from Who Came First, is a wonderful, lively song about life on the road and the accompanying loneliness, Townshend’s vocals darting in and out of the mix, complimented by his fluid, mesmerizing guitarwork.

From Rough Mix, Townshend’s acclaimed 1977 collaboration with ex-Faces’ bassist Ronnie Lane, “Street In the City” is a melodic, observational song that relies on Townshend’s winsome vocals to rise above the rich string-orchestral arrangement. Also from Rough Mix, “My Baby Gives It Away” is a twangy rocker with a loping groove and rapid-fire lyrics. Rough Mix is the jewel of Townshend’s solo career, a rambling collection of roots rock, British folk and country overtones and well worth checking out on its own.


The Definitive Collection also includes three songs from Empty Glass, Townshend’s 1980 solo breakthrough and his best-selling album to date. The album was written as Townshend struggled with the death of Who drummer Keith Moon. The personal nature of the lyrics and their combination of pop melodies and gutter-punk rockers took Empty Glass to the number five position on the charts. The album’s radio-ready singles were easy choices, but “A Little Is Enough,” an engaging love song with new wavy synth overtones and a driving beat is a fine addition to the collection, sounding amusing retro albeit featuring, perhaps, some uncharacteristically inane lyrics. He redeems himself with “Let My Love Open The Door,” the hit single combining the most attractive elements of ‘80s synth-pop with old-fashioned vocal harmonies and a killer hook. Befitting its title, “Rough Boys” shows a little more muscle, with a forceful Townshend vocal performance, imaginative keyboards and some tasty six-string riffing.

Townshend followed Empty Glass with the obtusely-named All the Best Cowboys Have Chinese Eyes in 1982. Overall Townshend’s most maddening album, both loved and hated by his fans, its arty, pretentious songs have withstood the test of time. The album’s “Slit Skirts” is a dynamic song, with interesting lyrics, an infectious chorus, and various musical twists and turns with signature changes and intriguing instrumental interludes. “The Sea Refuses No River” could just as easily have been one of Townshend’s compositions for the Who, a grand, majestic song that showcases some of Townshend’s most subtle vocals and his skills as an arranger. The song is, perhaps, one of the most overlooked of the artist’s canon.

By the mid-80s Townshend seemed to be going in a thousand directions at once, and seemingly lost sight of his creative strengths. “Face The Face,” from 1985’s White City: A Novel, is an intriguing choice for this collection, an almost experimental piece that starts off small, with an atmospheric intro, dissonant piano and clanging sounds building to a steady rhythm, kind of like a train coming down the track, straight at your stalled-out car. Townshend’s multi-layered vocals are one part electronic wizardry and one part Gospel fervor. “A Friend Is A Friend,” from The Iron Man: A Musical, is a slight slip of a song – perhaps that misbegotten album’s best, but a pale choice nonetheless. The two tracks included from 1993’s Psychoderelict fare somewhat better; a concept album ridden with spoken word interludes and weak material, “English Boy” is nevertheless a knock-down rocker with one of Townshend’s best vocal performances in a decade and some truly unusual musical undercurrents.


The Definitive Collection is a fairly decent overview of the ups and downs of Peter Townshend’s solo career, replacing the decade-old The Best of collection with a better song selection. I personally would have liked to have seen one of the Who’s classic tunes from Townshend’s Deep End Live! album included here. Also, all of the best stuff from this compilation – and then some – was included two years ago on the double-disc Gold collection, part of the industry’s efforts to cannibalize itself through countless variations on the same compilations.

However, if you remain among the uninitiated that just wants a taste of Townshend, The Definitive Collection is the way to go; go for the Gold if you want a deeper drink of the artist’s talents. If you like what you hear, grab copies of Empty Glass and Rough Mix to get a full measure of Townshend’s greatest work. (Hip-O Records, released January 23, 2007)

Review originally published by the Trademark of Quality blog

Buy the CD from Amazon.com: Peter Townshend’s The Definitive Collection
Posted by Rev. Keith A. Gordon at Friday, October 18, 2019